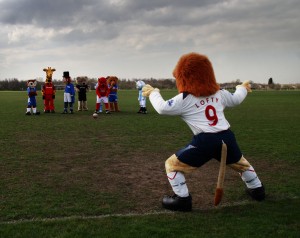 As I mentioned earlier, my father was at the Chelsea game this past Saturday. I had him write my a little guest blog, and as promised here it is.
I arrived at the Reebok in gentle late afternoon sunshine. No, that’s not a joke. In fact, you can tell that the stadium was not built with sunshine in mind, since for the first half an hour or so I was there, it was shining directly into my eyes (at first I was so surprised by the unaccustomed glow I thought Wigan must be on fire – no such luck, however), making it hard to concentrate on the cheerleaders. But then again, that might be a deliberate design feature.

I first experienced (there is no more precise word) the Reebok Rebels about three years ago. My jaw has been in a state of near-permanent downward dislocation ever since. I have nothing against cheerleaders in theory. Indeed, I have often wished I had several things against them in practice. But just as there are some things that shouldn’t be attempted in Texas (fish and chips, meat pies, a decent pint), the same applies in reverse. Cheerleaders are one of them. The girl directly in front of me swayed listlessly to series of dreadful 70s disco tracks; but at least she wasn’t bedraggled, as they usually are (and take it from me, the wet look does not suit Bolton cheerleaders). She was wearing what looked like a badly torn bin liner, but, then looking down the line of unco-ordinated lovelies, I realised they were all in similar outfits. After three numbers, my cheerleader (sorry, dancer) began to look distinctly distressed – her breathing became obviously laboured, she struggled to raise her perfectly Horwich-tanned leg above ground level, and could barely lift her pom-pom in the general direction of Rivington. It occurred to me that Sir Alex might like to weigh in on this disgraceful failure of fitness….

But I digress. I really wanted to write about Lofty the Lion. (Editor's note: you can find an extremely odd interview conducted with Lofty here . It appears that he believes he is actually a lion) The mascot was pottering aimlessly about the pitch, doing a very passable impression of our strikers, albeit admittedly with slightly more sense of rhythm and purpose than the cheerleaders, wearing a no 9 shirt – the Lion of Horwich of course. When the teams finally came out, and the cheerleaders collapsed in a wheezing heap, Lofty stood, deliberately I thought, next to our current number nine, Johan Elmander, and for a moment it was difficult to tell them apart, until one realised that Lofty had rather better hair, and looked somewhat less depressed – which is perhaps unsurprising, given that Elmander is Swedish and in the middle of a three-year goal famine.

The match itself followed a fairly typical recent pattern of Bolton encounters with more exalted opponents. For almost the whole of the first half, they held their own, without looking wholly outclassed, although without ever really looking like scoring either. Chelsea were far more incisive, and Bolton were only kept in the game by the brilliance of Jaaskalainen, who made half a dozen brilliant saves, the best after a Gary Cahill error saw Drogba clean through on goal. Cahill’s play was a particularly frustrating mixture: he looked cool and collected on the ball, and van distribute it well, but he made two appalling mistakes both of which should have been punished – sounds like England central defender material then. Bolton’s midfield struggled to gain possession, and then struggled to do anything useful with it. Cohen failed to make the impact of recent games, Muamba played reasonably well in a holding role, Chung-Yong Lee ran around energetically, but without much obvious purpose, and Basham didn’t do much of anything at all. Tactically, Samuel hung back and inside, leaving acres of space on the right for Ivanovic to occupy and always provide an outlet for a Chelsea pass. Ricketts, as is the way with wing-backs these days, looked impressive going forward and naïve and outclassed in defense. The most encouraging feature of Bolton’s play was an emerging understanding between Kevin Davies and Elmander, which is surprising in view of the fact that the Swede doesn’t speak that much English (but then again neither does Kevin Davies, which perhaps accounts for it). Twice Davies flicked on for Elmander to come close, the best attempt being a curling right-footed effort that dipped just over the bar. Elmander returned the favour with an angled header that took Carvalho out of the game, and which Davies met with a first-time left-foot shot that slid past the post when he might have done better to take a first touch. And then in the 46th minute, confusion in the Bolton defence sends Drogba through one more time – Jlloyd brings him down (although not in the vociferous opinion of the supporters around me, the strength of whose opinions was matched only by their preposterousness), is sent off, and Lampard coolly nets the penalty. If only they’d made it to half-time….

Megson brought on Gardner and Robinson for Basham and Lee, and Bolton’s hitherto ragged formation became as shapeless as a pregnancy smock. They didn’t cave in though; Gardner’s presence gave the midfield bite, at the cost of a few typically wayward passes, and Bolton tried bravely to press forwards – which of course left them hopelessly vulnerable on the break, and when Ricketts stood off the dancing Anelka, the Frenchman slid a pass across the area for Deco to finish with power and precision past a Jaaskelainen for the first time outclassed. ‘Bolton reject’ chanted a section of the home crowd whenever Anelka touched the ball (although without malice) – which simply emphasized the fact that, if there had been a rejection involved, it wasn’t on the part of Bolton. Chelsea’s superior passing and ability on the ball now really began to tell against a tiring Bolton, and in truth Chelsea in this kind of form can make any team look a man short. They duly made Bolton look two men short. The end was all too predictable, although the score, I think, flattered Chelsea in the end, although one of their goals was scored by the hapless Zat Knight. 3-1 seems about right. Now, just get it in the right net, Zat. Megson jumped up and down waving his arms on the opposite touchline, like a rather more than usually co-ordinated cheerleader – in the end, even he began to flag, and sat down panting in what they laughingly call the ‘technical area’. Perhaps Sir Alex….