Bolton 0-1 Liverpool: We Should Have Had That

Share All sharing options for: Bolton 0-1 Liverpool: We Should Have Had That

A Bolton side that saw only one change from the team that drew Wigan last weekend stayed at home to face a struggling Liverpool side that are as out of form as a team of their stature can possibly get. Bolton only have one win in their last seven matches and a grand total of two on the season with one loss and six draws rounding out the rest of their results.

Hit the break for a full write-up and match highlights 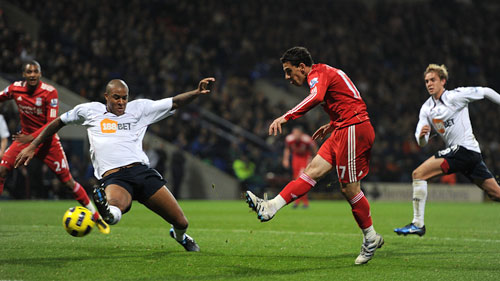 At the start of the match, Bolton sat in 10th place in the premier league on 12 points with Liverpool in lowly 18th but only 3 points behind the Trotters. Matilda summed it up best in her match preview:

While Liverpool look to be on the ups, Bolton may be going the other way. The attractive football we started the season with appears to be slipping, the results going with it. This game could be crucial for determining our trajectory for the rest of the season. Liverpool are a big club, currently out of grace, and beating them at home would be a huge boost to morale without being an impossible task.

A majority of the first half hour was kept under Bolton’s possession but Liverpool would claim the first chance as Fernando Torres broke through the White defense at the 8 minute mark. The Spaniard hit the ball very wide across the face of goal from about 9 yards out. Bolton would get a brilliant chance on 22 minutes from Stuart Holden. Pepe Reina would make a brilliant, top-shelf save to deny the young American his first Premier League goal.

For much of that first half, Bolton played the style of football that had become famous under Sam Allardyce. Hoofing it forward from the back to Kevin Davies can only work so often and unfortunately, it just wasn’t doing it in this match. With no connection between the defense and our attack, the ball would simply get lost in the Liverpool box. Just as Matilda had said, without the attractive play, we won’t get much out of this match. With that, the teams would go into the break 0-0.

The second half would start off a bit brighter for Bolton as the ball found Kevin Davies inside the Liverpool box twice in the first 2 minutes but he was unable to do anything with it. The next 15 minutes would see the fixture go back into the lull that it spent much of the first half in. Neither team with much of a chance to break the deadlock.

Bolton’s next real chance would come in the 73rd minute as Elmander found himself in space outside of the box. His shot was mishit but it had a chance of going into the lower left corner. Ultimately, it went just wide. Elmander found himself on the end of a great ball just a minute later on the left side of net. The shot was taken with his right foot and never had a chance of going in. In the 75th minute, Bolton won a free kick on the right wing. Matty Taylor delivered the ball across the face of goal but both Kevin Davies and Stu Holden were just inches of getting a touch on it and possibly scoring the much needed goal. The Bolton chances piled up but without result as the match headed into the final 10 minutes.

The breakthrough finally came in the 86th minute for Liverpool Fernando Torres found Maxi Rodriguez in the center of the box and the Argentine put it high center of the goal from 10 yards out. Torres’ heel flick was lovely but it should have never got past Gary Cahill who was as low as a basketball defender. The ball trickled through his legs and right to Maxi Rodriguez. Gutted.

In the end, Bolton were denied two penalties. Both appeals were fairly soft but have definitely been given in the past. A Sotirios Kyrgiakos shoulder into the back of Kevin Davies, Jamie Carragher bringing Chungy down, and a faint Jamie Carragher handball all could have been grounds for a penalty call. The fact of the matter is that Bolton had a number of chances and took literally none of them.
That’s an end of it.