How much better is everything following a Bolton Wanderers win? The sky is blue, the air smells sweet, and the haters are still out in full force. I'm sorry, say what?   That's right, despite an overall good performance from our mighty Bolton Wanderers, everyone still has an opinion. This week's Monday Set Pieces features some quotes from Owen Coyle, some more quotes from Gary Cahill, a dumb opinion via the Twitter, some idiots that claim to understand the Premier League but clearly don't, and Trotters searching for new talent. Hit the jump to see what's what. 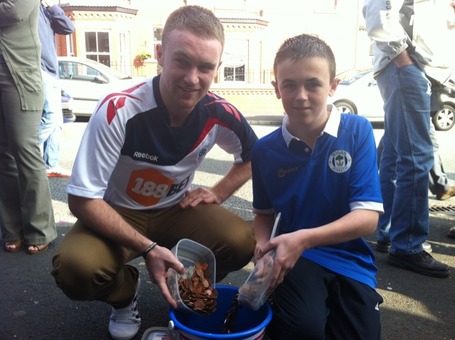 Emma is a child suffering from Neuroblastoma, the most common childhood cancer and an awful disease. You would have seen her at the Wigan match as she came onto the pitch at halftime. Bolton players and staff contributed £350 to the Emma Hoolin fund and there's a plan for over a hundred people (so far) to walk from the DW to the Reebok on February 11 for the return leg of t'Classico to collect more money. If you have anything to spare, please donate even £1 so that she can get the treatment she so desperately needs.

(Thank you to @ChezCon69 for letting us her photo)

"The objective of the institute is to provide education for aspiring young footballers so that they become world-class professional footballers backed with international qualifications." Maybe it's just me but I can't name a single world-class footballer to ever come out of the UAE?

"It's been difficult in the sense that one minute you think you're staying and the next you think you're going. The worst thing about it is that everything is outside your control. It was strange in that sense and, for me, this season has been a bit of a rollercoaster" You do have to feel for Gaz.

"But because of our start (to the season) it put us under more pressure coming into this game. We knew we had to get a result. But I was very confident. We worked hard on the training ground and the international break was a good thing in many ways." - OC

Quentin over at Vital Bolton examines statements by Premier League "experts" about how attendance in Bolton and at t'Classico absolutely must mean that no one likes Bolton, even those in Bolton. As usual, these "experts" fail to take the economy as well as how many premier league teams are in the immediate area of the Reebok into account.

Hot on the heals of the "foreign Premier League owners wanting to end relegation" debate comes this frankly stupid opinion on Twitter. Think before you speak.