It's always darkest right after a Bolton Wanderers loss, isn't it? Well here comes the Lion of Vienna Suite, carrying the torch of various links from the weekend to brighten up this cloudy (at least in Rochester, NY) Monday. To start off, look at how terrified this child is standing next to Marcos Alonso: 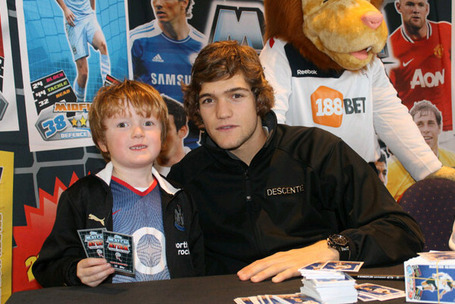 Looks like old Sam Allardyce is up to his old tricks and is signing more old Bolton Wanderers players to West Ham United. The latest victim? One known as El-Hadji Diouf who hasn't had a team since being dumped by Blackburn in August.

Cahill Says Some of the Team Are Letting Bolton Down

"A few of the lads, myself included, need to have a look and question themselves over whether they are doing enough. You can maybe afford to carry one player but you cannot afford to carry a handful and it has been different players in different games."

Coyle Wants The "Real Men" in the Squad to Show Up

"If you've got a soft centre it'll be shown in this league because it's ruthless. You want real men standing up to show what they're made of," the Bolton manager said. You need that mental strength because it's the best league in the world. The one thing they can't do is feel sorry for themselves because you certainly don't improve. They must retain that belief."

Chungy's Returned to England to Rehab

It's looking more and more likely that Chung-Yong Lee will be able to make his Bolton Wanderers return in February after spending some time rehabbing in South Korea. "Lee Chung-Yong fully fit is worth £10-20m, that's how good this boy's going to be," said manager Owen Coyle. "He was set for, I believe, a sensational season."

Bolton's International Players Allow Students to Learn About Their Cultures

"One hundred school children from Bolton's primary and secondary schools packed the Wanderers Suite at the club's Reebok Stadium to quiz international players Ricardo Gardner, Jussi Jaaskelainen, Martin Petrov and Tuncay Sanli on their homelands, cultures, language, as well as taste food from their countries."

And to finish it off, here's Chungy just being plain old cute: 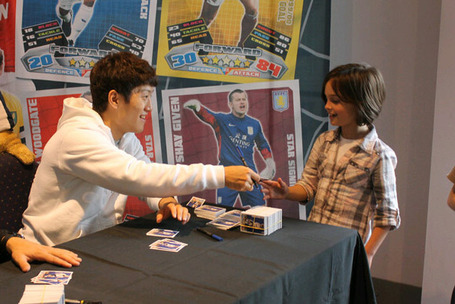