Road to Recovery: Alonso Out for Another Month-UPDATED

Share All sharing options for: Road to Recovery: Alonso Out for Another Month-UPDATED

While Wanderers' spirits may be high after the win against Blackburn, obviously we need a bit of bad news because we're Bolton and bad news is what we get. Unfortunately, this round of bad news once again has to do with our Spanish lion, Marcos Alonso. In his very first senior match after 4 months out, and after putting in an excellent performance, he had to go off in the 57th minute because of what looked like an injury to the same foot that he's just healed. He was sent in for an xray, and today tweeted the result. 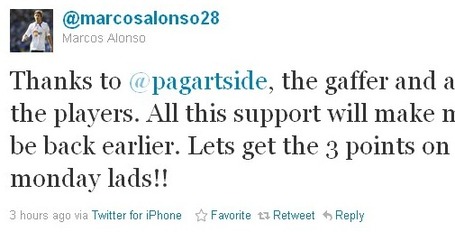 There is no official word from club yet as to whether it's a reinjury to the same bone or just a very unlucky foot, but at least the prognosis is shorter than last time. The other good news comes in the form of Welsh heartthrob Sam Ricketts, who is nearing return from his long term Achilles injury. He played a full 90 for the reserves at leftback, and it looks as though he may be able to make the first team on Boxing Day. Our best healing vibes go out to poor Marcos and here's to a speedy recovery!

In Owen Coyle's pre-Boxing Day press conference he gave more details about the Alonso injury. The prognosis has been elongated to 6 weeks out as he faces another surgery to reset the pin from the original fracture which took a knock. Hopefully this is the last time he faces a set back.