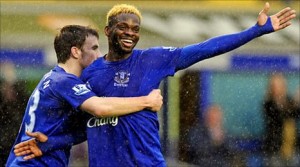 This match is a bit of a frightening prospect. After a horrorshow start to the season, Everton are pulling themselves together, and last weekend executed a 5-3 thrashing of Blackpool. Moyes' and his blue boys will be sailing after that elating result. Bolton however still haven't righted the ship after a mid-season dip in form. We were called "unlucky" not to get any points at White Hart Lane last Saturday (although I feel that is a bit generous), and the second half did feature some of the nice play we were treated with in the first half of the season.

Luckily for us Louis Saha, dubbed “in-form” by the BBC in a rather gross understatement, has injured himself in training and will not be playing in the match. His confidence must be through the roof after scoring four goals and assisting the fifth against Blackpool. Jack Rodwell joins Saha on the injured list, but apart from those two Everton are at full strength. Everton have been a bit leaky of late, not having kept a clean sheet in their last 10 matches. Not unlike Bolton actually.

To capitalise on this, I do hope that Coyle starts Sturridge. While I'm reluctant to join the Danny-Sturridge-is-the-best-ever-AHHHHH! train, you can't argue with what he's put on the pitch. That coupled with the fact that Elmander has scored once in his last 12 league appearances, it looks about time to see what little Danny can do given 90 minutes. This will be a big game for Stu Holden, as the midfield always plays a big role in Everton matches. Maintaining possession will be important, but difficult.

This will be an interesting game for the managers, as they've got a budding bromance. It will be a challenging match, but not an impossible one. As always, it depends on which Bolton show up. If the Bolton from the first half of the season, the one that looked pretty and hushed the haters, comes out it should be a cracking match, and hopefully we'll come away with some points. Come on you white men.