Share All sharing options for: Predicting the Starting XI - Mark

No matter what, Bolton’s lineup against Stoke City on Sunday won’t be our ideal one. An injured Stu Holden and cup-tied Danny Sturridge would have been very welcome additions to any side that Owen Coyle could potentially field. For those two, it just wasn’t meant to be. Still, here’s what I’d like to see the boss man put out tomorrow: 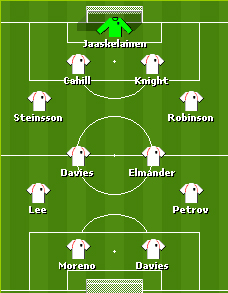 Goalkeeper:
Jussi Jaaskelainen. There really is no argument here. The Finn has the number 22 on his shirt but he’s our Number 1.

Defense:
The back four of Steinsson, Cahill, Knight, and Robbo has been the core of Bolton’s success, especially in the first half of the season. Prior to his injury, Zat Knight had played 90 minutes in 50 consecutive Premier League games for the Whites. With the back four fit and no one suspended, here’s to hoping that they can hold the Stoke attack. The case can be made for Wheater to step in at the back, and while he’s a very worthy defender, Zat has been good at the back.

Midfield:
In the absence of Stu, and assuming that he is fit enough to start, Bolton will look to Mark Davies to be the midfield general. Petrov performed very well against West Ham, assisting a Chungy goal. Speaking of the young Korean, he has the ability to change any game that he steps into for the better. Coyle had kept him on the bench for most of the last two months but it seems as though the gaffer had been saving Chungy for this moment. Finally, Elmander. The Swede had been placed on the wing in recent weeks and let’s be honest, it didn’t really work. He was a bit of a revelation as center-mid.

Forwards:
This was a bit of a toss-up in playing Johan up front or replacing him with Rodrigo Moreno who has been playing for the reserves of late. The speedy attacker has the potential to get on the end of one of Super Kev’s flick-ons and finish past Sorenson who will be in goal for Stoke. Bit of an Opta stat for you all: at 431, Kevin Davies has made nearly 200 more flick-ons than any other Premier League player this year.