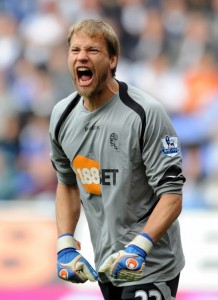 What is it with this team? Are we only allowed a certain amount of happy in one season? Are we being punished for enjoying ourselves earlier in the year? It would appear so, as we just watched our team fall to our third consecutive defeat in a fairly mediocre match. The most irritating thing is that it seems like we just don't know how to play anymore. There's been a lot of talk amongst the fans about a lack of passion, but I don't think that's it at all. Bolton are at a loss right now, something that is manifested in our captain's form recently. The ball comes to his feet and he doesn't know what to do with it. This ailment has spread to the whole team. We looked directionless for most of the match, players who normally make huge impacts were quiet, in fact the only player who really impressed today was once again Danny Sturridge.

It was an uneventful first half. Matty Taylor got things started with a low shot, but it was saved by Mignolet. It was an appropriate beginning to a frustrating game. The fouls were frequent and goal scoring opportunities much less so. Danny Sturridge came close several times, but never close enough. Bolton did have a period of pressure towards the end of the first half, and looked to be the dominant team going into halftime. However Bolo Zenden had something to say about this and a minute into stoppage time, he collected the ball on a counter attack, ran around Jussi and slotted it home. The half ended 1-0.

I harbored hopes that going down a goal would wake up the apparently dormant Bolton Wanderers, but it was to no avail. The second half was worse than the first for Bolton, with Sunderland looking fairly comfortable in the lead. Danny Sturridge still seemed to be the only player not in a coma. Out of nowhere in the 87th minute Ivan Klasnic headed home a pinpoint cross from Moreno. The Croat looked to have rescued a point from an otherwise forgettable 90 minutes for Bolton, but it was clearly not to be as 2 minutes into stoppage time, Zat Knight slid in an own goal from a Sully Muntari shot that would have been going in anyway. The game ended 1-2, and once again Bolton fans walked away disappointed.

Our season is ending with a whimper. It was, for the most part, a fantastic season, but this is not how I want it to end. Our weaknesses, a shallow squad, an inability to play through frustration, lack of tactical flexibility, have well and truly shown themselves. You have some work to do over the summer Mr. Coyle.