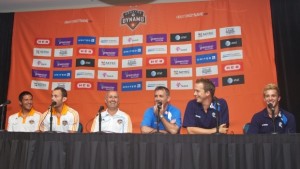 One win and one loss are the results tally for Bolton Wanderers as they are two-thirds of the way through their tour of the United States. The 1-0 loss to an in-form FC Tampa Bay was quickly avenged with a 3-1 victory over a tired Orlando City SC. The Trotters have no made their way to the center of the country for the tour's marquee matchup against the Houston Dynamo of Houston, Texas for the Charities Cup, some (obviously meaningless) preseason silverware.

Bolton, much like with FC Tampa Bay and Orlando City, will be Houston's first Premier League opponent. If you've lived under some sort of very large rock for the last year and a half or so, you would have missed the connection between the Dynamo and Bolton. For those who don't know, Houston Dynamo are where our dynamic and often quietly brilliant midfielder Stuart Holden made his name before Owen Coyle asked him to come to Burnley and subsequently Bolton for a trial before eventually signing a full contract.

Just like every other professional soccer (football) team in America, Houston are midway through their season where they sit 4th in the Eastern Conference of MLS with their last 5 results coming in at: L-T-T-W-T. One win in their last five but unbeaten in the last four. Midfielder Brad Davis leads the league in assists with 9 after 20 matches played while the leading scorer is Cam Weaver with just 4. Young goalkeeper Tally Hall is a force in net as he kept a 1-0 lead for 9-man Houston against Sporting Kansas City before they equalized through a deflection in the 90th minute.

The Dynamo play at 32,000 seat Robertson Stadium where their average attendance is somewhere in the neighborhood of 17,000 (a figure that is very comperable with many MLS sides). They have won two MLS Cups (the championship) in 2006 and 2007.

Expect Owen Coyle to field the first choice XI as Jussi, Gardner, and Steinsson were all rested during the Orlando match. Both of your Bolton Offside bloggers will be at the match so if you see us, shout on Twitter and come say hi!