Share All sharing options for: Eaves Set For Clarets Stint 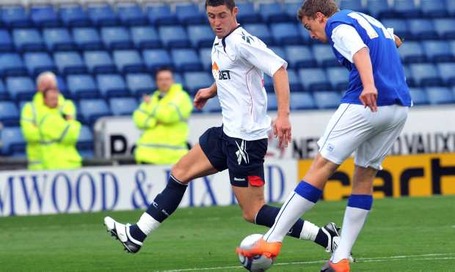 Apparently when Bolton bought Chris Eagles and Tyrone Mears from Burnley this summer, a deal was agreed in principle for the Clarets to take young Tom Eaves on loan. The deal will be great for both parties as Burnley get the 6 foot 4 striker to bolster their attack while Tom gets some very valuable playing experience in the Championship. The window re-opens next week and that is when Eaves will sign.

The 19 year old big man came to Bolton's attention after he was the hat trick hero in a 3-0 win for Oldham against Bolton Wanderers in a friendly prior to the start of last season. Both Burnley and Bolton bid for the youngster and while Burnley's bid was reportedly higher, Eaves chose the Wanderers. Blackpool and Blackburn were supposedly in for him as well.

Eaves is a year into his three year contract with the Trotters but has yet to play a game for the senior side.  The move will give him some time on the pitch and season him for when Bolton's entire front line inevitably gets injured.