Problem Areas: A Look At Adam Bogdan And The Goals Per Game

We want to understand where Bolton's goals are coming from. It's so very easy to blame the defense (and they are at fault for so many of them) but it's becoming increasingly important to have a look at the Bolton Wanderers goalkeeper.

Share All sharing options for: Problem Areas: A Look At Adam Bogdan And The Goals Per Game

Goalkeepers, much like everyone else on the field, have their tendencies. Whether it's a want to go down on their left hip as opposed to their right or something like being better with balls higher in the air than those on the ground (and thus reads as a weakness in going down low).

Adam Bogdan has consistently started in goal for Bolton for just about the last year. He had made appearances here and there prior to the 2011 / 2012 season but an injury to Jussi Jaaskelainen really put Bogdan in the spotlight. After a few shaky performances against the traditional top sides, Bogdan was sat in favor of the Bolton legend but more poor performances from Jussi (against arguably weaker opposition) saw Bogdan recalled.

The young Hungarian goalkeeper has had a number of issues in his short career that have kept him from becoming a top-class goalkeeper. At first, it was an apparent fear of coming off his line and grabbing balls that went across the face of goal but he has (for the most part) fixed that. Adam Bogdan will occasionally flap at a cross and when he does, the consequences are often dire for Bolton.

Now, Adam faces the same problem that his predecessor, Jussi Jaaskelainen, did. It's as if the goalkeeper coaches, Phil Hughes and Fred Barber before him, have taught Bolton's goalkeepers to do everything other than catch the ball. There's nothing wrong with not catching the ball if you manage to push it away from the play but when it's left dead in front of goal and your defense (who already are terrible at defending) isn't tracking the shot or their men, it spells disaster. 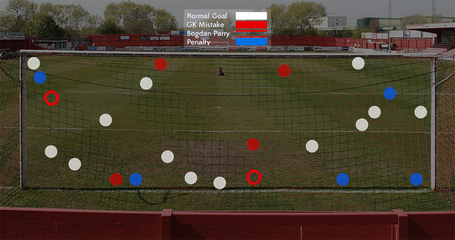 The above infographic illustrates every single goal that Bolton have allowed this season and approximately where it was when it crossed the goal line. The white dots are goal from the run of play, blue are goals from penalties, red are goals from goalkeeper mistakes, and the red outlines are goals that resulted from the goalkeeper parrying the ball back into play.

To date, Bolton Wanderers have played 13 matches during this Championship season. In that stretch, the team has conceded 22 goals, an average of 1.69 goals per game. Of those 22 goals, five were from penalties, 13 were from the run of play, and four came directly from Adam Bogdan mistakes. If four doesn't sound like a lot to you, you're wrong. That's 18.18% of Bolton's goals. That's nearly one-in-five. That's a ratio that is simply deadly should it continue.

Adam Bogdan is generally regarded as a good shot-stopper, it's what follows the save that sames to be the issue. Still, Bogdan has made a total of 49 saves this seasons, averaging 3.77 saves per game and allowing one goal for every 2.88 saves he makes, about one in every four shots he takes. His save percentage is 74.25%. For the sake of comparison, these are the save percentages of some of the world's best goalkeepers so far this season:

In terms of save percentage, Adam Bogdan is not that far off (or better than) a number of the world's most lauded goalkeepers. Yes, all of these names play in better leagues than the Championship but all also have better, (more often than not) world-class defenses in front of them.

After yesterday's loss to Middlesbrough, a number of the fans on Twitter went on about how Adam Bogdan was nothing more than an average goalkeeper. Many bemoaned the first Boro goal as a stranded Adam Bogdan reached out with his left hand at full-stretch to stop the initial ball hitting the back of the net. Unfortunately for him, it was down to that defense once again as no one tracked the substitute, Scott McDonald, as he tapped in the first of his two goal.

It was much the same story against Wolverhampton Wanderers last Tuesday as Adam Bogdan once again did his job of not allowing the ball to hit the net. Unfortunately for him, he couldn't catch the ball or at the very least, push it out of danger. Kevin Doyle, did something that the Bolton defenders didn't, and followed the shot.

Blame Adam Bogdan all you want. He isn't the issue though. Dougie Freedman picks up the difficult Bolton task this week and he's got a hell of a job ahead of him as he desperately needs to shore up that Bolton defense and drastically lower that goals allowed per game number.