Perception, not performance, led to the death of the classic English centre forward

Share All sharing options for: Perception, not performance, led to the death of the classic English centre forward

Seemingly long gone are the days of Dixie Dean and Nat Lofthouse. Long gone are the days of the big, strong front man snapping his head round and powering the bullet header home while holding off multiple defenders coming at them with everything short of an axe or club. The classic English centre forward, the big man that was good with his head and strong in the air, is a thing of the past. More a whisper of footballing days gone by than anything else.

It begs the question: what happened to the classic English centre forward?

To further examine the situation, we have to back to the days when men were men. The days when your winger could sprint upfield with a toothpick in their mouth and a cigar in their hand. The days when you could barge into the opposition goalkeeper with -- not like -- a tractor and no foul was called. It was in these days, the interwar period, where the classic English centre forward thrived.

The season? 1927-1928 and Everton were working their way up to the title. In those times, there were 22 teams in the first division and each team played 42 games. Wins yielded two points and draws yielded one. Everton would win the title that year with 53 points (20 wins, 13 draws, nine losses) and Bolton Wanderers would finish seventh. Everton scored a total of 102 goals that season with more than half of them, a massive 60, coming from Dixie Dean.

Dean, a centre forward, stood a then-massive 5'10" tall. The world's average height at that point was around the 5'7.5" mark and, for the sake of comparison, Nat Lofthouse (who would make his Bolton debut some 20 years later) stood 5'9.5". Dean was hurt in a motor cycle accident early in his Everton career and broke his jaw. The doctors had worried that he might not ever play football again but instead, he scored with his head in his next Everton outing.

In Everton's first nine games that 1927-1928 season, William Ralph "Dixie" Dean would find the net in each of them and scored five goals in a 5-2 Everton romp of Manchester United. When all was said and done that year, Dean scored 60 goals in 39 appearances, a record that has not even come close to being touched in England.

And then there was Nat Lofthouse. He burst onto the scene five years after Dean was retiring from professional football, making his debut for Bolton (and scoring) against Bury at the tender age of 15. Lofthouse had previously impressed when playing for Bolton Schools XI, scoring seven goals in a match on his debut. I could wax lyrical all day about Lofthouse (and I have) but this piece isn't all about him.

After Lofthouse, who finished his career with 255 goals in 452 appearances for Bolton Wanderers and 33 in 30 for England, there were plenty of front men that could be classified as the classic English centre forward. Yet, as the decades went on, the ranks dwindled. Players like Kevin Davies and Emile Heskey, once considered essential to the English game, have now all but become dead to large portions of the fanbase. The former is Mr. Bolton, the club's pride and joy, and the latter found immense success at Leicester City and Liverpool early in his career. 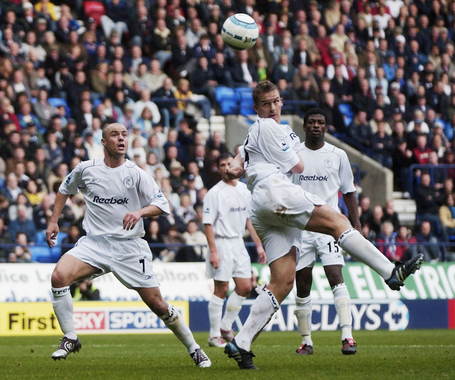 Some will say that it's the immobility of the big target men that was their downfall. I disagree.

As the years wore on, pace took over the game and players were getting fouls called for doing essentially nothing. Protection of goalkeepers had muscled-out the men who used the rules to their advantage. Pace took over and players running so quickly that they stubbed their toe on a blade of grass and went flying into the box became a sure-fire whistle for the referees. With players going down easier, it because much less difficult for referees and fans alike to refer to the target men as thugs.

The one statistics that people seem to bring up, without fail, about Bolton's Kevin Davies is just how much he fouls opposition players and yes, Kevin Davies consistently was in the running for most fouls committed. Yet, these same groups tend to leave out the fact that Davies is also one of the league's most fouled players. He takes as much as he gets.

But really, is it so wrong to go in hard, shoulder-to-shoulder? To try to win a ball in the air through -- wait for it -- strength and presence rather than slumping down and waiting for the easy whistle?

The fact of the matter is that the classic English centre forward is an endangered species and one that is closer to being extinct than making a comeback. How many are there in England's top flight? Just two come to mind for me: Andy Carroll and Grant Holt. Looking in the lower leagues, you are sure to find more but that's an indictment of the position in and of itself.