The new man came in for an hour’s debut on Saturday and despite looking very unfit he showed enough to me to show that he can be a decent signing for the club. He played in an advanced role alongside Eagles and Ngog behind the central striker, and was tidy in possession and took up some promising positions.

Whilst his fitness will undoubtedly improve, it is interesting to see that this is the kind of player that the manager envisages us retaining – confident on the ball and with an attacking mentality. Sort of like Darren Pratley but with boots on the right feet. 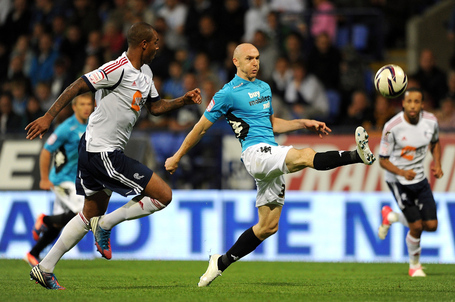 2) THE NEW AND IMPROVED ZAT KNIGHT

What a transformation! From the error-prone and frankly poor centre half that we have seen over the last three seasons to the lionheart of today – something has changed with Knight. Whether it be mentally or whether it can be put down the drop in quality of this new division he is finally stepping into the breach when we need him.

He is determined, solid and has had an obvious improvement in his attitude where commitment is concerned. Gone is the jovial character of last season replaced with a steely gaze and a willingness to put his head in where it hurts for the cause.

I have been very critical of him in the past but this season he has easily been in our top three performers.

3) CAN WE HAVE OUR LEE CHUNG-YONG BACK?

I remember when that clown Megson (or more likely, his Chief Scout) brought over this little slip of a Korean lad who managed, over 18 months, to become a firm crowd favourite and integral part of a reasonably successful Bolton side.

Since those heady days we have of course suffered relegation and LCY suffered with a badly broken leg. His return at the end of last season when clearly around 25% fit was one of Coyle’s more baffling decisions. Since then, he has been given slack by the crowd as he returned to something near full fitness but we have not seen a return of the ‘old’ Lee. Understandable concerns such as being tentative in the tackle have been coupled with a strange unwillingness to attack, to beat a man or to strike in the manner he once did.

I believe that whilst his stock has fallen he remains a sellable asset and currently I would not be upset if he became the sacrificial lamb in January and was sold in order to fund the arrival of one or two new bodies. 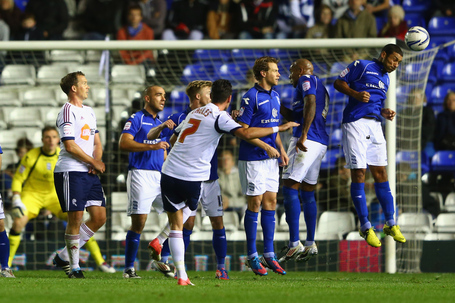 Yep, the much-maligned ‘soft touch’ who spent last season counting his blessings that LCY was injured has turned into our most important players this season. It was always likely to be so, with his pedigree being very much defined by performances in this division – whilst he was solid enough in the Premiership this is definitely his stage.

Traditionally pigeon-holed as a winger, Eagles has all the attributes of the modern attacking midfielder: he is good on either foot, capable of long shots and accurate set pieces and blessed with a fantastic head of hair. We were always going to need him to step up to the plate this season and so far he has delivered with a team-leading six goals, and a division-leading eight assists. Ordinarily I would contend that assists are a meaningless statistic but in this case it identifies the varied contribution of Eagles.

However, Saturday was one of his quieter days, with the manager choosing to utilise him on the left of an attacking three and, in my opinion, losing some of that attacking potency which is best served by positioning him behind the lone central striker where he can dictate play and attack with impunity. I believe that he is wasted out on the wings and would like to see a return to a central position as soon as possible.

5) THANKS OWEN, FOR NOTHING

The squad that Coyle cobbled together has shown so far that they have no cohesion, little attacking flair and most of all lack a cutting edge. His signings have shown to be largely poor, and we are paying the price now much as we paid the price for Megson’s over-indulgence in the transfer market.

However what is most troubling is the stream of revelations from the training ground as to the fantastic turnaround in the ideas and methods used away from the stadium. We all know the impact and brilliance of Allardyce when it came to behind-the-scenes innovation – well all that was shipped out by Coyle who seemingly thought it would all magically come together on a wing and a prayer, and a table tennis bat.

Effects of the reintroduction of Prozone, the double sessions and the tactical work employed at Euxton already comes across in the games, with players looking a lot fitter and more tactically aware than previously, and I just hope that the changes made were made in time. This is a long season, and we’re only a third or so in, there is still time.