Dougie Freedman prefers to play a 4-2-3-1 formation. Owen Coyle used this formation occasionally as well, although he always reverted back to his beloved 4-4-2. Ironically, Coyle built a squad that is actually better suited to the 4-2-3-1. So what will this mean going forward for Wanderers?

The 4-2-3-1 has been around for a while, of course, but it is particularly in vogue at the moment. This formation really came to be well-regarded in people's minds thanks to two clubs that used it almost exclusively starting about six years ago. Those two clubs: Liverpool and AS Roma.

One of the best attributes of the 4-2-3-1 is its versatility. Roma and Liverpool used it in vastly different ways. At Roma, everything revolved around Francesco Totti (and not because he was so fat he had his own gravitational field). He was the one up top, but they had so much attacking talent around him, and played with so much movement and interchange, it was hard to tell that. Defenses just couldn't keep up as the captain pulled the strings and set things up for the pace and skill around him. 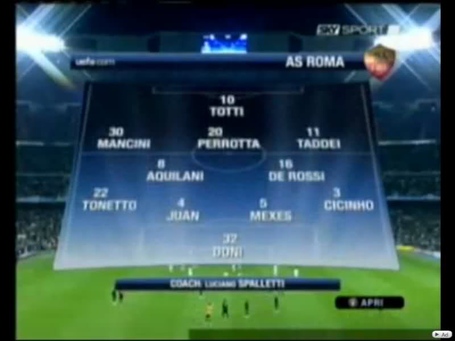 Liverpool, on the other hand, focused on defense and discipline. Rafa Benitez's most important players were his two holding midfielders. At his highest point, the Champions League victory in 2005, Benitez still wasn't completely devoted to the formation. He started with Steven Gerrard and Xabi Alonso in central midfield. That didn't work, as evidenced by AC Milan's 3-0 lead. So Benitez brought in Deitmar Hamman. This is not really the ideal pairing for the holding role in the 4-2-3-1, but it's not far off. Both players were good in the tackle, able to get forward, tremendously skilled on the ball, and able to link up defense and attack very quickly. The one flaw? Neither was especially mobile. This was covered up by Gerrard playing in front of them, at a time in his career when he covered a shocking amount of real estate.

Bolton do not have any World Cup winners in their central midfield stable, but Dougie has some options. I won't include young Jacob Butterfield in this list, as he is only with us for a month, and unlikely to feature during that time. Plus, if he does, I want to save all of my puns.

Thus far, we have seen Mark Davies and Keith Andrews in the holding roles. Andrews is a very traditional British defensive midfielder. He runs around a lot, puts in some hard tackles, wins balls in the air, and occasionally ventures forward to try his luck from 25 yards out.

Davies, on the other hand, checks several boxes as far as what we want from this role. He's a solid tackler, for the most part gets his defensive positioning right, and he can certainly run at the defense. He's no Jay-Jay Okocha when it comes to passing, but he is good enough at getting the ball to the attackers. He's mobile, but doesn't cover a ton of ground, and he is not that big physically.

Jay Spearing is very similar to Davies. I suspect that is why Dougie has not been playing him. He has most of the same attributes, covers a bit more ground, is a better tackler, but is even smaller and easier to push off the ball. Both are liabilities on set pieces. That's the big thing about the holding two in this formation, they really have to a team with a good understanding and complimentary skills.

Look at the Roma team above. Alberto Aquilani and Daniele de Rossi fit together perfectly. If we did want to play them together, Davies would probably have to be pushed into the attacking three, with Spearing and Andrews occupying the holding roles. On one hand this would be a pretty effective setup, on the other hand, we have several players who are better attackers than Davies to put in that line of three.

Josh Vela is a long-term injury victim, and Darren Pratley is not going to play the holding role, he is all attack.

That leaves our wild card. We don;t know exactly when Stuart Holden will be fit again, or what kind of player he will be. If it even approaches the level of what he was before the injury, he is perfect for this formation. The one question: Who partners him? He is bigger than Davies and Spearing, but not by too much. We are going to need a physical presence. Fabrice Muamba was supposed to be the guy. I haven't read his new book yet, but I hope he writes about his partnership with Stu at some point, they were an ideal pairing.

So what will Dougie do? In the immediate future I think he will persist with Mark Davies and Keith Andrews in the holding role. I would start Spearing from time to time as well, but Freedman's rotation policy is still a bit unclear.

Long term things get a bit foggier. Presumably Holden will regain his starting position rather quickly. His ideal partner given his own shortcomings is Andrews. But Spearing and Davies are probably both better players than Andrews. I think Spearing can do the job alongside Holden, as long as we have solidified the defense behind them by then. The two holding midfielders are the lynchpin of the 4-2-3-1 formation. If you don't that right then the rest doesn't work.

Let's hope Dougie Freedman makes a good call. Maybe you have your own ideas about who should fulfill these roles. Please comment below.