Chris Manning takes a look back at the Whites' loss against Ipswich and wonders what can we take from the game.

So is Dougie Freedman the new saviour? The jury is still out, and for me his constant tinkering with the starting eleven isn’t helping us one bit. There is no doubt that collectively we look a lot more organised that under Coyle, but if reports from Euxton are to be believed we would look more organised with an arthritic budgie in charge than Coyle.

You’ll struggle to find many teams who are successful who continually chop and change personnel on a match-by-match basis. Granted, squad rotation is important but I also believe that having your best eleven finding an understanding through repetition should also be similarly important. Rhythm, patterns of play and understanding all come from players being familiar with who they are playing alongside. They then go on to learn who makes what in terms of runs and partnerships can be created which only benefits the team in the long run.

The blame for this may also lie at the hands of our previous manager. The mediocre and disorganised style of Coyle cannot be easily remedied simply by the arrival of a new manager, and the facts that we are where we are also bear out the theory that WE ARE SIMPLY NOT THAT GOOD. 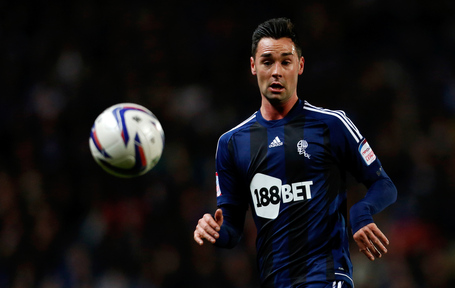 Whilst we have never been a free-scoring bunch, at the moment we seem particularly profligate. The goals of Kevin Davies and Chris Eagles have been crucial in keeping our heads above water as we negotiate the choppy Championship seas.

However, I can barely remember a time where we have been so desperate in front of goal. The strikers have so far contributed ten goals between them in the league so far, with Davies hitting six of those. Such a paltry return from the main goal-getters in the team is another reason to tick off as to why we are currently languishing in 18th place in the Championship.

We are creating the chances, we are getting in good positions but we are not making the most of them. Harking back to the McGinlay and Blake days, for example, we had strikers who were both proven at this level and of whom you could rely on to hit 20 goals per season. When they would run on goal it would lift you off your seat, and that isn’t something that can be said for the majority of the current crop. When Ngog bears down on goal with just the keeper to beat - ask yourself this, are you confident he'll score? I know I remain seated in those situations.

Whilst I appreciate that Dougie can only work with the squad he was given, I would hope that he also appreciates the need for striking reinforcements come January.

Yet again this team seem to prefer taking one step forward and then two backwards. A promising result and performance in the week against Dirtburn being a step in the right direction was followed by a setback against Ipswich.

This was a great chance to put two wins together and reach the heady heights of 10th, and to enter the festive period with a spring in our step and to then hopefully move on for an assault on the top eight after January.

The only consistency at the moment is in our inconsistency. The only way to succeed in this division is through form and momentum, and at present we are struggling with both. It’s such a tight league that a string of good results can elevate you to a position from which you can then kick on and attack the Play Off places or even higher.

This can be linked to the previous point where consistency of selection brings out familiarity amongst the team and they can use this to bring about regular rhythms and patterns of play to help us get these victories that we are so desperate for.

Sigh. I really feel for the lad. Not only as part of the GSM (Ginger Solidarity Movement), but as a human being. I do not doubt for a minute that he is not giving anything other than 100% to the cause, and he has certainly shown that he has the goalkeeping nous to be a decent stopper at this level. However, form cannot be ignored. The mistake for their winner was a basic one, a simple gathering up of the ball which although coming at pace was coming in a straight line with no distractions inbetween.

We signed Andy Lonergan in the summer to provide competition for Bogdan, and I think the time has come to give young Adam some time out of the spotlight and let Lonergan have a run. He is an experienced goalkeeper of some 250 league appearances, and so isn’t some rookie thrust into the spotlight and left to sink or swim.

If we are using the squad to its fullest elsewhere then surely the goalkeeping options should be similarly utilised. 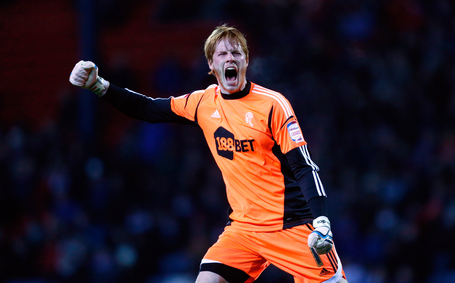 Just leave. Now. Before I say something I’ll regret. Delete your Twitter account, but first post a message encouraging us to beg you to stay online. Whatever. I don't care anymore.

In fact, wait, read this first LOV's Mark writes about our on-loan "striker"