All Signs Point To Adidas Kit Switch For Bolton Wanderers

Share All sharing options for: All Signs Point To Adidas Kit Switch For Bolton Wanderers

A month ago we presented why a move away from Reebok and to Adidas for Bolton Wanderers' kits seemed more than likely and new clues today suggest that the move is now all but confirmed. Other teams that wore Reebok like Internacional and RC Lens jumped ship last year while key players like Thierry Henry and Iker Casillas now have new gear from other manufacturers.

It looks like Bolton Wanderers are finally about to do the same.

A cryptic clue from a source simply said "red stripes." A number of Bolton fans immediately speculated that it had something to do with the new kit and a further few thought that it meant Celtic or United States Men's National Team style hoops. Given the earlier rumors regarding Adidas, I ventured a guess at three red stripes running down the shoulder.

A couple more sources came forward claiming to have information on the new shirt, saying that it would look a lot like the new Middlesbrough kit (below) with the colors reversed. 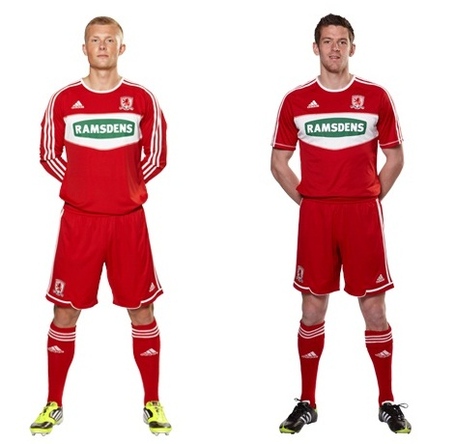 If true, Bolton fans can expect a clean, classy, mostly white kit. Something that Reebok have failed to really do for years. There are a few things to consider though:

Bolton's team equipment has been manufactured by Reebok since the 1993-94 season when the local company took the duty over from Matchwinner who got it after Umbro who took it from Admiral. As part of the technical sponsorship, the Reebok logo had been the chest of Bolton players from 1993 all the way until 2009 when the club signed a shirt deal with 188Bet.

In 2005, Reebok was purchased by the Adidas group for a cool $3.8 billion. After the sale happened, the club said that kids would not be affected by the merger at all. At the moment, Bolton's kit and stadium deals run to 2016. Ever since the purchase by Adidas, Reebok's profile in football (soccer) has slowly but surely decreased. Where once they had multiple teams in the Football League (Bolton, Manchester City, and West Ham), the Wanderers are the only ones that remain.

Reebok also sponsored the likes of Iker Casillas, Thierry Henry, and Ryan Giggs where now it's only the Welshman in Reebok boots. Casillas signed on with Adidas last year and Thierry Henry is sporting Puma at Red Bull NY.

Bolton are the only team in England that have Reebok equipment. If the team switched to Adidas next year, would anyone complain?

Of course, this is still far from official and even though the players have seen the new strip, we haven't. As soon as more details emerge, the club teases the kits, or something official is announced, we will definitely let you know.