Share All sharing options for: UPDATED: Bolton Wanderers Preseason Tour To Take Them To Philadelphia, North Carolina, and South Carolina?

The club has yet to announce an official trip and any available details are thin but we're speculating hard. As a Bolton blog run by a bunch of Yanks, we're all about the Wanderers visiting the United States and naturally, we want to know what's going on. There have been a number of hints in recent months and we've been told that a US trip was "very likely" for Bolton as certain details only needed to be confirmed.

The first clue came some two months ago as we learned that Bolton Wanderers goalkeeping coach Fred Barber had a stateside trip scheduled for a goalkeeping camp in Maryland. The camp for aspiring goalkeepers would take place in the summer months. The event has since been removed from the camp's website.

This morning, the Bolton News published an article with the title of "Wanderers Go Stateside" before quickly removing it. As we tend to trust the Bolton News on most Bolton Wanderers matters, we decided to run with it. As soon as any and all details are made public, we will definitely let you know.

Until then, this is the already confirmed preseason schedule for Bolton Wanderers. 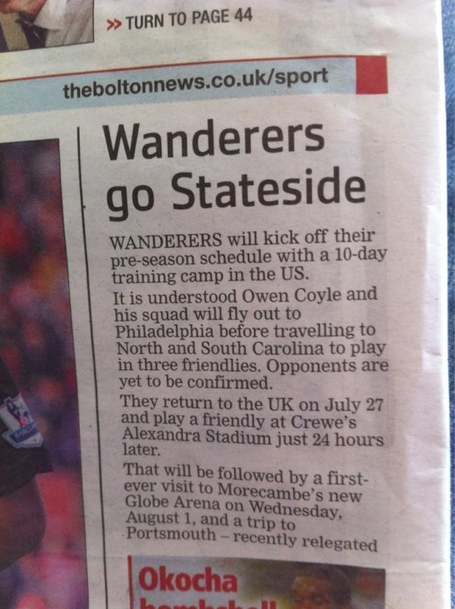 We were sent a photo from the printed version of the Bolton News by Matt Luetchford. The Bolton News piece claims that the Trotters will make the trip over the atlantic to play in Philadelphia, North Carolina, and South Carolina. The Philadelphia are has a number of sides in various divisions of American soccer including Major League Soccer's Philadelphia Union.

There are a number of lower division teams in North Carolina as well. Bolton played NC's Charlotte Eagles and Charleston Battery in the summer of 2010. The North American Soccer League's Carolina RailHawks also take residence there.