Stuart Holden: The (Indirect) Cause And Solution To Bolton Wanderers' Problems

Share All sharing options for: Stuart Holden: The (Indirect) Cause And Solution To Bolton Wanderers' Problems

Bolton Wanderers fans, in no uncertain terms, pine for Stuart Holden. The American midfielder is quite literally everything that the Trotters are missing on the pitch. Holden's presence in the center of the park coupled with his box-to-box work rate and raw talent would get him straight back into the side when fit while making Mark Davies and Keith Andrews look like they belong in the reserve squad by comparison.

It all started going right for Bolton Wanderers after Holden made his first team debut and so very wrong when Jonny Evans tackled his knee into oblivion. Bolton Wanderers' plummet from 6th place in the Premier League to 20th in the Championship can, effectively, be blamed on Stuart Holden's absence.

Mark Davies is usually good at passing the ball laterally. What he lacks is that final killer ball, that incisive pass that can free the striker and create a chance. I say usually because Davies was downright useless against Burnley in Bolton's 2-0 loss on opening day. He was quite literally anonymous until being substitute after 75 minutes. Keith Andrews had a decent showing but his fiery temper earned him a yellow card very early on, effectively putting a damp towel on the defensive midfielder's play for 3/4 of the match.

When Stuart Holden is in his stride, he is the best of both Andrews and Davies type players in one adorable package with great hair. This is why Holden was very much essential to Owen Coyle's Bolton Wanderers. He would be able to play a great through ball at one end and immediately make a game-saving tackle on the edge of the box the next minute, rarely tiring. His presence in the side was a help to both the attackers and defenders because his play did an excellent job of supporting both 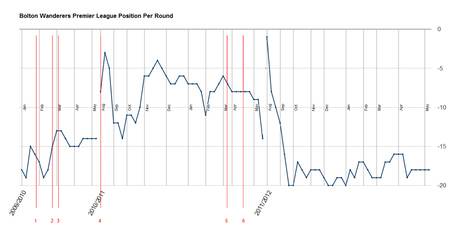 I have taken the liberty and compiled the above graph of Bolton Wanderers' table position in the Premier League from Owen Coyle's takeover in January 2010 until Bolton Wanderers were relegated at Stoke City in May 2012. You can enlarge the image by clicking on it or here to see it in full size. You will notice six red lines, each denoting a pivotal moment from Stuart Holden's Bolton Wanderers career. In order, they are:

From the 3 to 4, a span of about six weeks, Bolton Wanderers experienced a drop in table position from 13th to 15th place before ending the season in 14th. It was the extended layoff from the Evans tackle that really did Bolton Wanderers in.

Going into the Manchester United match, Bolton were flying high, in sixth place. At the end of the day, they were in 7th place and the next week in 8th. The Trotters finished that season in 14th. Going into 2011/12, many thought that the flow of blood had been stemmed after the resounding 4-0 QPR away win on opening day, but that was not the case. The following five weeks, Bolton fell to 8th, 10th, 12th, 16th, and 20th places with relegation to the Championship confirmed on the final day.

Why did it go like that? Many Bolton fans will tell you that it is due to Owen Coyle's tactical ineptitude. These people weren't complaining when Bolton Wanderers were pushing for a place in Europe. Instead, the issue boils down to Bolton's inability to replace Stuart Holden.

Replacing your team's best player is always a difficult task only made more difficult when the team has no money to spend and similar players are quite pricey. Simply put, Fabrice Muamba, Nigel Reo-Coker, Darren Pratley, Mark Davies, Keith Andrews and whoever else takes up a role in center midfield have not been able to fill in where Stuart left off and it really is a shame. Owen Coyle has not been able to find a suitable replacement both in Bolton's squad and out. The team still has a number of loan spots to use but getting a bigger team to send quality to the Championship (as opposed to a similarly sized Premiership teams) is a big ask.

That said, for his sake and ours, Owen Coyle will need to find something that works. One option is returning to the 4-5-1 formation that saw Bolton get limited success last year. The formation would look to provide a stop gap in midfield but with only one true defensive midfielder on the books, it will be a departure from the Muamba/Reo-Coker-anchored midfield of last year. Mark Davies will most certainly look better in a five man midfield but this also brings up a lot of questions about the attack and whether Marvin Sordell or Benik Afobe (Kevin Davies up front by himself is a lost cause) will be able to get the job done.

Derby County and a return to the Reebok Stadium are fast approaching with the match scheduled for Tuesday. Hopefully three points await at home.