Breaking Down The Hull City Goals: An Examination Of What Went Wrong

Share All sharing options for: Breaking Down The Hull City Goals: An Examination Of What Went Wrong

Another abysmal defensive performance brought Bolton Wanderers down after being in a winning position. There was so much wrong with the defense yesterday that it became very difficult to figure out just what went wrong an each of three Hull City goals. A lot of the angst on Twitter was put towards Tim Ream, who did not have a good showing, but he was not even close to being the only one to blame. 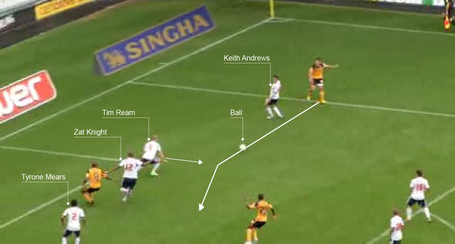 Robert Koren broke down his right wing after Hull City's initial efforts were deflected clear. Keith Andrews was Koren's mark on the play. The Hull midfielder cut back a little bit, putting Andrews and Tim Ream a step behind the play and put the ball into the box. Ream attempted a diving stab at the ball and gave it a slight deflection, putting it right into the path of Sone Aluko. 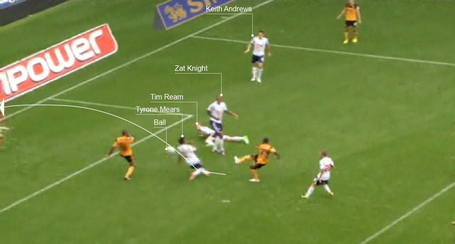 Aluko had far too much space in the box as Zat Knight quite literally watched him shoot. The ball deflected off the calf of Tyrone Mears, looping past a wrong-footed Adam Bogdan. Of the four men near Aluko, Tyrone Mears was the only one that attempted to close him down with Zat Knight doing a whole lot of nothing. 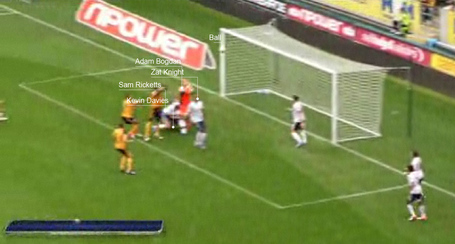 The second was a comedy of errors to say the least. The screenshot makes it extremely difficult to tell exactly what happened so here goes. The corner came in from Hull City's Stephen Quinn towards the former Bolton man, Abdoulaye Faye. Both Kevin Davies and Sam Ricketts attempted to help out on defense by heading the ball away. However, the two bundled into each other and went to ground. In the melee, they brought Adam Bogdan down with them, allowing a clear and open header for Faye. 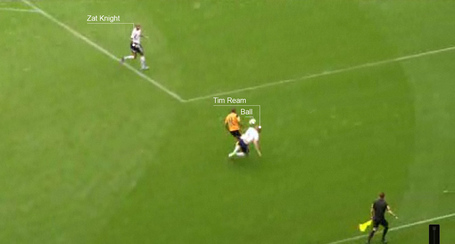 Far and away the most infuriating of the three Hull City goals. On Bolton's left flank (Hull's right and the same as the first goal), Tim Ream was on the ball with Hull's Jay Simpson pressing very hard. Simpson got around Ream and pushed him off the ball way too easily. From the replays, it looks as if Ream tried to draw the foul and totally failed, leaving the American defender on the ground. 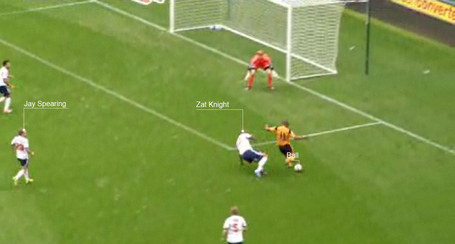 It was then on Simpson to take on Zat Knight, a task that ultimately proved to be way too easy. Simpson rushed in towards the six yard box, rounding Knight without much of a worry. 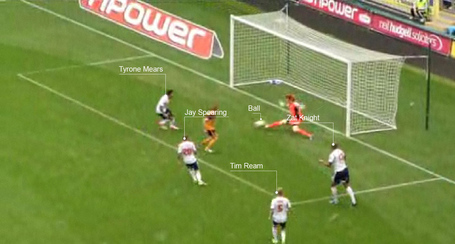 The only thing that Jay Simpson had left to do was play in the onrushing Stephen Quinn. Simpson found him just five yards shy of the goal and with four Bolton men surrounding him, Quinn finished the move off easily. Jay Spearing, Tyrone Mears, Zat Knight, and Tim Ream all failed to track Hull's new signing, allowing him to score on his debut and stick the dagger into Bolton.

Ball watching, allowing too much space, and being out of position. Those are the issues that led to Hull City putting three past Bolton Wanderers yesterday and issues that have plagued Bolton for the last 18 months. One question we have to ask is just where was Sam Ricketts on the first and third goals? The play came down his wing but he was nowhere near the play.

Bolton need to figure something out and soon. Maybe it's time to try Marcos Alonso on the left? Give Joe Riley a run on the right? Something's got to give.