Share All sharing options for: Crystal Palace v. Bolton Wanderers - Five things to look out for

So, Dougie is to test his tactical mettle against the league's flavour of the month and, in my opinion, most overrated tricky winger. He has to take a lot of credit for the rise and rise of the lad from Palace reserves to the England squad - it was Freedman who pushed and developed the player into someone who is supposedly a target for the Manchester clubs at an eye-popping £12m.

When Crystal Palace won at the Reebok earlier in the season it was Zaha who won the penalty which led to Murray scoring - his trickery and unorthodox style bamboozled the Bolton defence (not a tough task, to be fair) into fouling him inside the box.

So the trio of Dougie Freedman, Lennie Lawrence and Curtis Fleming should, in theory, be best placed to work out a tactical plan to stop the dangerman. Then again, in theory we shouldn't be sixteenth in the league after the New Year. 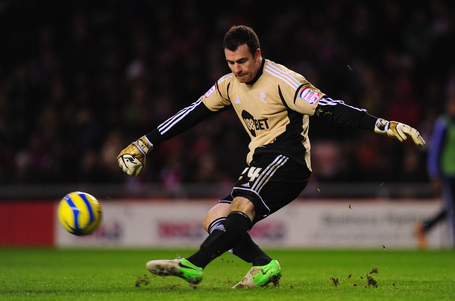 The online debates have been furious ever since the first leg of the FA Cup game against Sunderland when Lonergan came in and performed manfully, making some excellent saves from Fletcher in particular.

I think that we all agree that Bogdan is nowhere near the finished article, though he has held on to the no.1 shirt for over a year now. However I think he is suffering from having both an unsettled, an often-changed and an often-out-of-form defence in front of him - meaning that he is both busier than he might expect to be, and not getting the support that he might expect from older and more experienced colleagues.

However, there is much to be said for Lonergan's form and CV - with over 300 appearances at Championship level under his belt. He has been patient and shown when needed that he can step up and therefore it would not surprise me if he kept the shirt for the game against Palace.

In the long-term I believe that Bogdan will be a good goalkeeper, but at the moment I would be happy to see him taken out of the spotlight somewhat.

Finally it appears that the Marvin Sordell that we thought we'd signed has arrived. Hopefully we've seen the back of the moody, twitter-obsessed lad that we've observed all too much of over the last year and now we can look forward to the hungry young goal-getter that we need.

Performances and goal return in the last few games have been much-improved and I think that he deserves to have this form rewarded by a start against Palace. He provides a mobile and nippy presence up front that we sometimes lack, and he will be full of confidence after his recent successes.

His absence last season was a curious chapter in a depressing story of pain, relegation and Steinsson being the worst right back we've ever had. However it was thought by many that he would come into his own in this division considering his pedigree but again it hasn't happened thus far. Let's hope that the recent successes can point to a bright future for him.

The new boy was left out of the Millwall squad and out trotted the line that drives fans up the wall. Fitness reasons dictacted that he didn't play a part though he is expected to be back in time for the Palace fixture.

We have seen first-hand what he can do, and his arrival onto the scene as something of an unknown quantity coupled with a bargain-basement pricetag should allow the lad some leeway with our notoriously impatient fans. You only have to look at Sordell for how heavy a multi-million pound transfer can sometimes prove a burden.

Davies has an eclectic CV, having had more clubs than Chris Eagles has probably had Miss World winners, he has made all the right noises since joining and would be another good option to have from the substitutes bench should we need another attacking outlet at the weekend.

5) Give Youth a Chance

Regular readers of my Twitter account (@19manning83 - I rarely follow back) will know that I have been championing the inclusion of Josh Vela and Chris Lester for some time now. I first saw these two play for the U17/18 squad at various times as part of my research for the Football Manager games and I was immediately impressed.

I have been pleased and proud to see them thrive and become part of the reserves and now the first-team squad. A fair bit of time has passed since I would chat to Josh via Blackberry or that I would see Chris doing his shop in Tesco, but it is good to see from a club perspective that we have young promising players breaking through. It could even be said to be a legacy of the groundwork put in place by Owen Coyle who was all for this sort of internal (and a bit of self) promotion.

By all accounts Josh Vela was excellent in midweek against Sunderland and the reports received have praised his enthusiasm, accurate passing and tenacious tackling. I think that he deserves a chance in the centre of the park to display his talents against Crystal Palace.

Lester is a different player in that he is a tricky winger who is adept at playing on the shoulder of the full back and utilising a keen eye for goal. He offers a pacier threat than the likes of Lee Chung-Yong and Chris Eagles and also would be an excellent alternative should we require a different approach to breaking down the Palace defence.

I doubt that either will start the game, but I would expect them to be on the bench with an eye to coming on should the situation require.