Share All sharing options for: Holden looking fit in reserve start (with photo)

A brief report from the County Ground in Leyland as Bolton Wanderers are (currently) leading Oldham Athletic 1-0 in a Manchester Senior Cup clash. Both Josh Vela and Stu Holden are making their long-awaited returns from their respective knee injuries. Stu Holden is wearing the number 6 shirt and the Captain's armband.

Holden is still a few weeks away from a full first team return but this appearance (for both him and Josh Vela) is a massive step forward. The two will not get any time against Millwall at the weekend but could see some minutes in the FA Cup replay vs. Sunderland next tuesday. 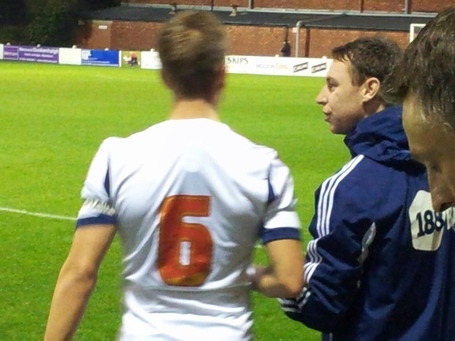 The photo is a bit blurry, yes, but it's dark and shot with a cell phone. Also, it's better than nothing. Also, it's Stu!