On This Day in 2002: The Signing of Youri Djorkaeff

Our man in the stands Chris Manning takes a look back at one of Bolton Wanderers' most important signings of the modern era: Youri Djorkaeff. The French international made just 81 appearances for the Trotters but the impression "Le God" made on the fans will last a lifetime.

Share All sharing options for: On This Day in 2002: The Signing of Youri Djorkaeff

Being a devoted fan of Serie A in my youth, with hours of well-spent weekend time on the sofa watching both Gazzetta on a Saturday before my own match, and the Sunday afternoon game following my Mum's roast dinner - I was well aware of Youri Djorkaeff - the French midfielder/attacker who played for my adopted Italian side, Inter Milan. I knew him as a compliment to my favourite player of the time, the proper Ronaldo, who was the most famous player in the world in the late 1990's and as such his team, and Djorkaeff, ended up being featured on television more often than others.

I noticed that this Djorkaeff was a talented and lithe footballer, a scorer of great goals but not always a regular starter alongside Ronaldo, with the Chilean striker Ivan Zamorano often being chosen to partner the Brazilian. It was this lack of regular action that prompted a move to German Bundesliga outfit Kaiserslauten in 1999. This spell was an unhappy one for Djorkaeff, who found himself out of favour by his second season, and this prompted a move to England and to Bolton Wanderers in 2002.

At this point, Bolton Wanderers were very much the perfect example of a 'yo-yo' club - generally being too good for the First Division (now The Championship), and not quite being good enough for the Premier League. We had brought in a forward-thinking manager in Sam Allardyce, and he set about doing his utmost to maintain our hard-fought and newly-won Premier League status. The scouting network was expanded exponentially across the globe and the news of Youri Djorkaeff's disaffection in Germany soon reached his ears.

A deal was struck initially to bring the player to Bolton Wanderers until the end of the 2002 season, with a view to making the move permanent should the club avoid relegation. Whilst initially struggling to adapt to the pace of the English game which worried some - would the then-33 year old Djorkaeff be able to thrive in the kick-and-rush style of the Premier League? Well these worries were swiftly batted away by the player who began to come to terms with the new style of play, and soon became the main man for Allardyce's men. Relegation was avoided by the skin of their teeth at the end of the 2002 season with Djorkaeff making 12 appearances and scoring four goals.

That summer the talk was all about whether his signature would be secured by Bolton Wanderers with interest in the player coming from his native France and his old stomping ground in Italy. The player was rumoured at the time to have had offers from Lyon and Brescia, though he eventually put pen to paper on a two year contract at the Reebok Stadium - delighting the supporters who had come to love his languid and elegant style of play. The signing was overshadowed somewhat by the arrival of Nigerian midfielder Jay-Jay Okocha on a Bosman free transfer from Paris Saint Germain. Again the scouting network and contacts of Bolton manager Sam Allardyce reaped rewards.

Djorkaeff's first full season with Bolton Wanderers began inauspiciously - two defeats in the first two games of the season ahead of a difficult trip away to Manchester United had fans concerned that another season of intense struggle was ahead - however the Whites came away with a 1-0 victory courtesy of Kevin Nolan and the visiting fans were jubilant. Further investment was made by the club in signing the Spanish international Ivan Campo from Real Madrid, Laville from French club Lyon and Salva Ballesta from Valencia to boost the squad. It is absolutely clear to me that signings of this international standard would have been much harder to make had the first step not been made by the club to bring in a recognised name like Youri Djorkaeff. He was very much the pioneer in this sort of move and the club reaped the benefits with some fantastic performances.

However this was something of a false dawn, with the club struggling over the course of the remainder of the season, eventually surviving on a dramatic final day at home to Middlesbrough, whilst relegation rivals West Ham could not get the result needed to save themselves and condemn the Whites. It was survival by the very skin of their teeth but it was survival nonetheless. Victory over Middlesbrough was a follow up to some excellent performances by Djorkaeff and some memorable goals - none more so than the spectacular overhead kick which earned a vital point away at Charlton Athletic over the Christmas period. Djorkaeff's influence was crucial in keeping Bolton Wanderers in the Premier League and he was beloved by the supporters. Indeed such was his influence on the younger generations that Allardyce was prompted to describe him as the 'perfect professional' such was his dedication in training and the hours spent after practice with the club's youth teams.

The following season, 2003-4 saw a new dawn for Bolton Wanderers, with ambitious signings such as Stelios from Olympiakos, the permanent signing of Ivan Campo from Real Madrid and the arrival of a certain Kevin Davies after a successful trial on a free transfer. These new signings and the confidence gained from having experienced international footballers on the books saw Bolton Wanderers begin a golden age under Sam Allardyce. The club began the season in a traditionally slow manner, losing 0-4 against a Cristiano Ronaldo-inspired Manchester United, but soon recovered, finishing in eighth place and banishing any thoughts of relegation by the mid-season point. The club also reached the Carling Cup Final, only to be cheated out of victory by Mike Riley, losing 1-2 to Middlesbrough despite Djorkaeff and Co.'s best efforts. His season ended in May with 29 appearances and a very respectable ten goals - alongside newcomer Kevin Davies and behind top scorer Kevin Nolan with thirteen.

This eighth placed finish and the increased prize money on offer from the lucrative Premier League meant that further investment came with the high profile signings of Gary Speed and a shy and retiring young African forward by the name of El-Hadji Diouf from Liverpool. The arrival of new blood especially in the attacking sphere meant that it was understood that the older players would begin to be phased out - this was told in no uncertain terms to Djorkaeff who took advantage of the club's offer to leave by making a free transfer move to Blackburn Rovers in September 2004, following a hugely successful two and a half years at Bolton Wanderers. Djorkaeff only made three appearances for Blackburn Rovers, and after turning down lucrative moves back to France made the decision to sign for the New York/New Jersey Metrostars - who in turn became New York Red Bulls.

Djorkaeff was the first Frenchman to play in MLS, and was an immediate success, winning his team's MVP award in his first season and scoring ten goals in the process. A much less successful second season and a battle with chronic ankle injuries prompted Djorkaeff to announce his retirement in October 2006 and the player affectionately known as 'Le God' by Bolton Wanderers supporters hung up his boots following a long and varied career of almost 600 appearances and 200 career goals. 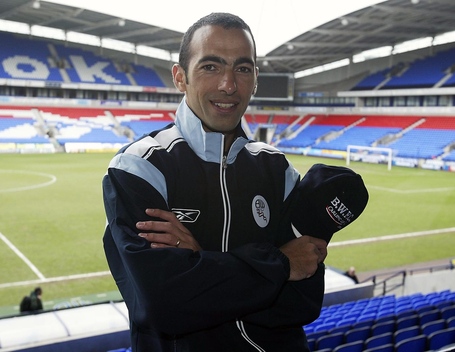