On this day: Atletico Madrid vs Bolton Wanderers - UEFA Cup Round of 32

Share All sharing options for: On this day: Atletico Madrid vs Bolton Wanderers - UEFA Cup Round of 32

Bolton Wanderers had enjoyed a golden age in the mid to late 2000s. We regularly finished in the top eight of the Premier League, and we had qualified the the UEFA Cup previously, a run which ended with defeat to Marseille of the French Ligue 1 in February of 2006.

Qualification for the 2007-08 UEFA Cup was secured on the final day of the previous season following a 2-2 home draw to Aston Villa, with Wanderers under the stewardship of Sammy Lee following the shock resignation of Sam Allardyce the previous month.

Bolton Wanderers had begun the league campaign dismally and Lee was relieved of his duties to be replaced by Gary Megson. They had managed to draw 1-1 away at FK Rabotnicki of the Macedonian First League, with a late equaliser from Ivorian centre half Abdouleye Meite, an Allardyce signing from Marseille. Progression to the group stage was confirmed by a 1-0 win in the home leg at the Reebok Stadium with a goal from sub Nicolas Anelka.

The group stages brought Wanderers together with SC Braga of Portugal, Aris Thessaloniki of Greece, Red Star Belgrade of Serbia and the German giants Bayern Munich. Progression through the group stage was hard earned, but Wanderers qualified undefeated in third place with 6 points, following one win and three draws from their four group matches, much to Megson's displeasure - as the man was desperate to exit the tournament which, in his misguided belief, was a 'distraction' to the squad who were battling relegation from the Premier League. Idiot.

Bolton drew the Spanish side Atletico Madrid in the next phase, known as the round of 32. The first leg was held at the Reebok Stadium in front of a sell-out crowd, and the Whites triumphed 1-0 thanks to a second-half El-Hadji Diouf strike. The game was marred late on by the sending off of the current Manchester City striker Sergio Aguero for spitting at Matt Taylor - something that a lot of Bolton fans empathised with. 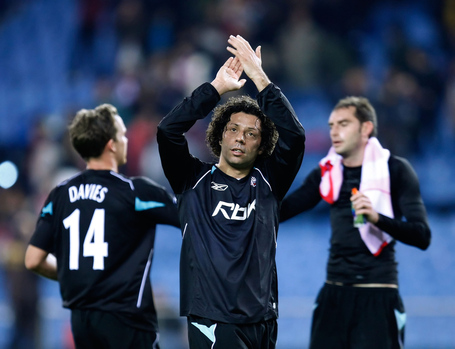 So it was to be the decisive second leg that would determine whether the Whites progressed to the Round of 16 and a tie against Sporting Lisbon, of Portugal. Held at the Vicente Calderon stadium in Madrid in front of a crowd of 30,000 (some 25,000 down on capacity), made up of approximately 5,000 Bolton Wanderers supporters who had enjoyed a day of winter sun in the Spanish capital. Drinks flowed in the Plaza Major, and the supporters were in a merry mood as they made the trip to the stadium for the evening kick off. I can happily report that the pizza and the beer in the cafes of Plaza Major was a big improvement on Subway and a weak coffee at Middlebrook.

As usual, Megson had put out a weak side in the forlorn hope that his idiotic bleating about distractions would be realised in defeat so that we could attain that fantastic 17th place finish that he so loved. The supporters assembled beforehand were unimpressed with this decision from Megson even though it was one that was widely predicted. His stupidity and disregard for the interests of the supporters would be manifested the following season though looking back it was clear to see even in moments of glory.

Bolton restricted Atletico Madrid to few chances, mainly long-range efforts from ex-Liverpool midfielder and world-class diver Luis Garcia. Diego Forlan and Jose Antonio Reyes were similarly frustrated by the Wanderers defence which included new signing Gary Cahill. Bolton were not without chances of their own - Greek international Stelios Giannokopoulous missing the best of them as he fired straight at Christian Abbiati when clear on goal. The Polish referee, Granak, did his utmost to aid the Spanish side but even his desperate cheating and belief that any sort of physicality was an evil that he must personally wipe out, he was unable to inspire a home goal. 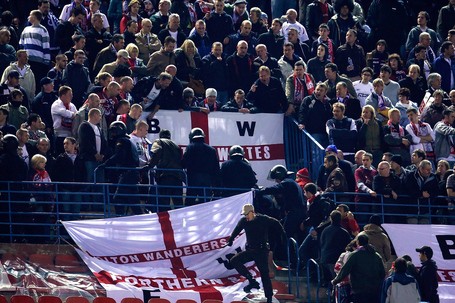 Whilst all this was occurring, the unfortunate Bolton Wanderers supporters present had to put up with a ferocious onslaught of their own, from the Spanish police who were, to quote a great man, "acting like pigs" as they waded into the supporters with batons causing injury and panic to spread. It was a disgraceful turn of events, largely without provocation. Luckily the majority of injuries sustained were superficial, though the actions of the Madrid police force prompted a formal complaint from Bolton chairman Phil Gartside after the match.

Despite ferocious pressure in the second half, the Bolton side emerged victorious and headed into the Round of 16 to face Sporting Lisbon. Unfortunately, again Megson tried to throw the tie, this time succeeding as the Whites lost 0-1 in Lisbon following a 1-1 home draw. Survival was achieved at the end of the season, in spite of Megson, rather than because of.

However, despite the best efforts of the clueless idiot, the memories of the scalps taken and the experiences experienced would never be forgotten by the supporters.