Memories From Lisbon, 5 Years On

Very occasional contributor Michael Murray looks back on the 2008 UEFA Cup trip to Lisbon and the passing of what was one, for the fans, one of the most memorable journeys in recent Bolton Wanderers history.

Share All sharing options for: Memories From Lisbon, 5 Years On

And so it was on March 13th 2008 that the Wanderers made their final sojourn into European competition. After the ‘miracle' in Madrid, the intrepid but understrength European Wanderers set sail for the Portuguese capital after a 1-1 draw at the Reebok in the first leg.

‘Better than Zidane' had given the Wanderers a first half lead but an equaliser from former Blackburn midfielder Simon Vukcevic put Sporting in a strong position for the second leg, a position which was strengthened further when he, whose name is considered blasphemous in these parts, decided to leave no less than nine first team stars back at home. He cited the weekend trip to Wigan as more important in the context of the season. Clown.

Due to a lack of holidays remaining from work, added to the fact earlier trips to Skopje, Munich, Belgrade and Madrid had all but emptied my bank account; I embarked on the club's day trip. I can remember thinking beforehand that this would be the last beyond the shores of Blighty. A squad minus Nolan, Davies, Campo, Diouf, Gardner, Jaaskelianen, Andy O'B, Taylor and McCann didn't fill me with a lot of confidence, so I decided to mark the game as a celebration of our time in the UEFA Cup by doing what it appears everyone else did, got absolutely wasted.

Now those who regularly follow my ramblings on Twitter will have noted that over the last couple of weeks I have been mithering for anyone who was there on that day for their memories because mine are hazy at best. I remember being in a square in the city centre and I sort of remember being on a bus to the ground. That's pretty much about it.

The game pretty much passed me by apart from the goal which I've since seen on YouTube, along with my flag, which, despite my extreme level of intoxication, I had managed to get into a prominent position. It's also been rumoured that the sight of the flag on TV may have caused the downfall of one or more relationships. Flags can be powerful symbols.

Before I continue, I'd like to thank those who have contributed in helping me piece together a sort of chronology of the day, which will hopefully give those who were unable to make the journey a feel for what following our beloved in Europe was like. You all know who you are so I won't go on with an Oscar's style namedropping spree. 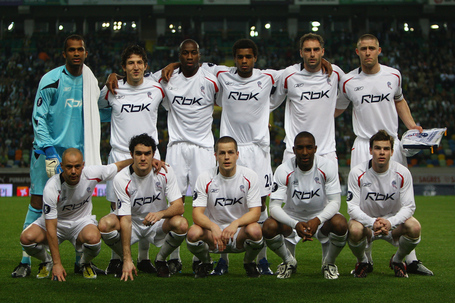 I also hope that, should we ever get the opportunity to experience European competition again, those who haven't made an away trip in the past will do so should circumstances allow. It would also be nice if whoever the manager is at the time understands how important it is for the fans and doesn't disregard the competition as a nuisance. Anyway I digress....

After what was a very early start and I would assume at least one pint in the bar at Manchester Airport for no reason other than to settle my nerves (it wasn't at all), we took a pleasant flight to the Portuguese capital where we were bussed into the City centre and told to be back in a specific place at a specific time. What most sound minded people would probably have done was to take a trip around Lisbon, to see the sights of the historic city and soak up the local culture. We didn't. Alcohol and a bit of dicking about became the order of the day.

After firstly going into a pub just off the square and discovering that it was about €6 a pint (I say pint, it was a continental pint, so therefore not quite a pint), common consensus dictated that the little supermarket around the corner would serve as the bar for the afternoon. They quickly sold out of litre bottles of Superbock and Sagres as well as washing powder. I found it intriguing that the local police didn't see anything strange about this at all. The intention was to make the fountain foam up and have a massive party in the soap suds. Unfortunately, even at such an early stage we were all quite drunk so didn't understand why pouring boxes of some generic branded soap powder didn't work.

The fountain did come in handy as the day progressed, serving as a handy area to keep the beers chilled. It was also used by some Bolton fans to chuck their mates in. Why not? It was warm. One of the major highlights came when we paid a local hobo €10 to join them. Luckily he was such a nice fella and was more than obliging, firstly stripping to his boxers and climbing in. He even climbed the fountain's structure and swan dove into the bottom. This was also tried by a Wanderer who is probably still feeling the effects five years on. Anyway, back to the Hobo. One of the loudest cheers occurred when someone pointed out that he had soiled his underwear (insert facial expression here).

As the day wore on, the beers flowed and the local Del Boys came around offering us genuine Armani sunglasses for the bargain price of €5 a pair or two pairs for €10. You can't argue with that for value on genuine Armani. They also seemed intent to provide us with a particular brand of soft drink, but seemed perplexed when asked if they had any Pepsi. I also have some recollection of trying to explain to one of them that he should go to the supermarket, buy a shed load of booze and bring that back and sell at a mark-up. Actually, I wish I had done that myself. It could've been profitable.

The afternoon continued, as did the flow of beer. A game of boot a football in a Peter Kay ‘Av It style into the middle of traffic started as did a rendition of the full BWFC songbook. This attracted the interest of a group of Canadian students who for some reason found a group of pissed up English people quite entertaining. I won't lie; some of the girls were hot so we made them honorary Wanderers fans. We taught them songs and generally had a good laugh. One of them even got a couple of us to do a Soldier Boy??? dance with them, although that was absolutely definitely not me and no video ever existed to prove this, ever!

Game time came around and we made our way to the stadium. Some fans fell asleep. Some suffered due to a few too many hours of sun and beer. Others fell foul to dodgy goat's cheese sandwiches. As we entered the stadium, we were given umpteen free scarves which the club had provided for the home game but not managed to get rid of. The majority of these were given away to the home supporters after the game. I thought this was a nice touch.

The match itself was completely forgettable. This was most certainly due to the quality of football on show from our weakened side and absolutely nothing at all to do with alcohol. A team containing such powerhouses as current Premier League players Danny Guthrie, Ricardo Vaz Te and Joey O'Brian, along with Championship topping Heidar Helguson acquitted themselves fairly well against a technically superior Sporting side. Jlloyd Samuel was gash. 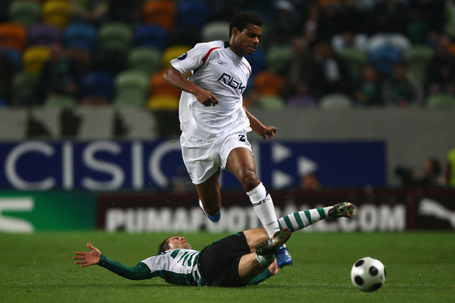 Bolton kept the hosts at bay until Pereirinha curled an effort past Ali Al Habsi in the 85th minute. That was enough to break the resolve of the Whites and led to strains of ‘M*gson Out' inside the stadium. I also have it on good authority that my drunken mug was on TV and my mother wasn't overly impressed. Ooops.

Looking back, our record in continental competition was actually pretty good with many teams finding Bolton a difficult team to break down. It's a bitter pill to swallow knowing that we only lost two out of our 18 European ties, away to Marseille and away to Sporting whilst managing to hold our own in the Allianz, the Vicente Caldreon and even going over to Serbia and beating Red Star. I also, as a fan, find it disheartening that some at the club saw being in the competition as a distraction. For a club like ours, it should've been cherished. I'm not saying it should have been prioritised as highly as the league but to treat it with the disdain that we appeared to was wholly wrong.

The fact that we'd left our best players at home to keep them fresh for the game at Wigan and we lost against a team with 10 men for 89 of the 90 minutes made the result harder to stomach. Hindsight is a wonderful thing but I'm sure at the time the fans would've accepted losing at Wigan if it had meant progression in the UEFA cup and what would've been a Battle of Britain tie against Rangers in the Quarter Final. Who knows, maybe we would've made it all the way to Manchester for the final. I mean, Middlesbrough and Fulham have managed to get to finals so why not Bolton Wanderers?

As a closing note, I think I need to stress that the following events did occur, but not necessarily in the order quoted. For that I make no apology.

Just imagine what we could've done had we been able to throw a Campo, a Kevin Davies, an El-Hadji Diouf on after an hour. It pains me to think, it really does.