Our main man in the stands, Chris Manning, takes a look back at the late, late show at the Reebok.

It was, for most of us, the first 90 min glimpse of the (rumoured fee) £700,000 January signing of Medo Kamara. He began the game like an exuberant child, racing around the pitch and generally causing a nuisance. In fact it was a little surprising that he evaded a yellow card, such was his general clumsiness in the opening stages.

As the game wore on, he began to exert some influence. His pedigree is decent and points at someone who is both comfortable in the big games and who should be dominating games at this level. I think we saw signs of that during the game against Blackburn Rovers last night. His passing was crisp and tidy, and his physicality was encouraging despite his diminutive frame though as we've seen from Jay Spearing we should never assume that just because a midfielder is under six feet tall that he cannot rough it up with the best of them.

The manager, Dougie Freedman, has often said that it's 'a squad game', and the arrival of the likes of Medo Kamara into the side and into the midfield along with the form of Darren Pratley and the return of Stuart Holden bodes well for the closing stages of the season where we will need reinforcements of real quality. It seems to me on current evidence that when he has settled into the league, the country and Bolton Wanderers that we will have a real asset on our hands.

I do however have a sneaking suspicion that Medo Kamara has been brought in to replace a certain American midfielder, though I hope I'm wrong. From what I have seen thus far his abilities and positional sense is perhaps more in line with Jay Spearing, of whom the manager has already admitted that we are unlikely to sign on a permanent deal once his loan spell from Liverpool ends at the closing of the season. 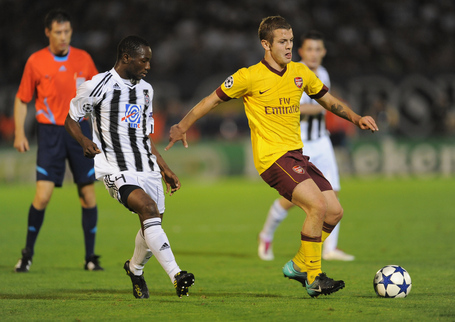 There has been an element of Bolton Wanderers' fanbase that wanted to see the former Preston North End and Leeds United goalkeeper take the place of regular no.1 Adam Bogdan ever since he was signed in the Summer. This is understandable, given that Lonergan is an experienced and talented goalkeeper, and despite Bogdan offering some excellent recent performances it was often pointed out that when given his chance in the FA Cup games against Sunderland and Everton that Lonergan had proved to be an able deputy.

After suffering a thigh injury against Barnsley at Oakwell at the weekend it was reported that Bogdan was struggling to be fit enough to play against Blackburn Rovers last night and it proved so when the teams were announced and the Bolton no.1 was missing from the starting line-up. Lonergan's performances in the FA Cup, as mentioned before, gave those in attendance confidence that we would not suffer from having the man who is nominally our 'second choice' goalkeeper between the sticks.

As the game progressed Lonergan showed why he is a man of over 225 Football League appearances - he was tidy with his footwork (despite wearing green and white boots - a goalkeeper in coloured boots! I've never seen this before!) and solid with his catching. The saves that he had to make, especially in the first half, were very much routine though he did well often distributing the ball to the full backs, breaking up the routine of the long punt to the forwards.

The second half saw a little more traffic headed his way, and he twice acrobatically tipped headers onto the crossbar, keeping his clean sheet intact. At no point did the fans in the stadium feel concerned that he was going to suffer a calamitous moment such as seen on one or two occasions this season with Adam Bogdan, and he also seemed to inspire confidence in his defence with his steady work.

In general terms I am not especially convinced that either goalkeeper is better than the other, but I do believe that football is about momentum and therefore I would be both surprised and a little disappointed if Lonergan was not selected to keep goal on Saturday in the home game against Brighton and Hove Albion. He gave no cause for concern and so therefore I would give him the no.1 shirt, or whichever daft number he has. Goalkeepers should be either no.1 or no.13, perhaps with a youth teamer picking up no.25, but that's just me.

3) THE CHAMPIONSHIP IS GREAT

For ages now I've been secretly thinking 'I wish we were in the Championship'. Honestly I have. The Premier League is very nice and all that. Lots of top players to watch, glamorous teams to appreciate and nice comfy stadiums to sit in. It became very familiar during our stay in the top league, but let's all be serious - the Championship is a much more enjoyable league to be in.

We all enjoy the supposed rivalry we have with the likes of Manchester United and West Ham United, but face facts - nothing gets the blood pumping like a local derby with Blackburn Rovers on a cold Tuesday night down at the Reebok. You can pick out three or four home games per season and think 'why am I going?' when you know deep down that United, Chelsea, City etc. at home are likely to end up in thumpings, which are no fun to watch/suffer/endure.

This season the games have come thick and fast - with opponents less salubrious than the aforementioned 'Big Five', but no less entertaining. From a personal standpoint this has been the most enjoyable season in recent memory. We are going into games now as favourites, rather than underdogs, and we are suitably respected by opposition managers as a team to beat rather than as fodder for the latest Champions League side to visit the Reebok Stadium.

Whilst the season has, admittedly, been up and down I have enjoyed going to the games more than I can remember doing in the last few Premier League seasons. I enjoy seeing new teams such as Peterborough and Brighton, and renewing acquaintances with teams who in my early years were regular opponents, such as Derby County and Leeds United. Gone has the glamour of midweek ties against Arsenal and Liverpool, but to me this is 'my' Bolton Wanderers. The early years were spent facing the likes of Nottingham Forest and Charlton Athletic and these are the days that I look back on fondly.

I enjoy meeting these new teams and seeing the new players perform. We might not have the best quality of play around but it's such a competitive league that there is barely a game played that has nothing riding on it. Previously it was always a drag to come down to the Reebok to play 'nothing' teams like Aston Villa or Reading, games which usually were tedious and rarely had anything of significance riding upon them. Now we are in such a tight league that each game is vital and it's all the more fascinating for it.

The one down side to this league however, is the coverage that we receive in the national press and media. My American friends, who write for this site, often bend my ear looking for highlights so that they can get information and coverage of their favourite side. We Brits however have to suffer the dreadful Football League Show and that dribbling shitgibbon 'Clem', but that's for another time.

When I arrived at the Reebok Stadium last night, having had my pork ciabatta sandwich in the Fanzone (thanks Mum), and after I was forced to listen to the dirge created by some student band who were playing at Spinal Tap-esque decibel levels I was informed of the starting line up. The people I stood with were incredulous that Dougie Freedman had dared to tamper with the side that had beaten Barnsley on Saturday.

He had chosen to recall Kevin Davies, as well as bringing in Medo Kamara into the midfield. This change was not a massive shock to all, as Freedman has thus far shown that he is an advocate of the squad game, and given Kevin Davies' history in the fixture it came on no real surprise that he was recalled into the starting line up to face Blackburn Rovers.

Performances aside, I believe that the manager's decision to employ squad rotation is a key factor in our recent success. Other sides, I have noticed, tend to play the same or similar line ups each week, which must surely have a twofold impact upon the rest of their squad both in terms of match fitness and morale. It cannot do a professional footballer any good to train all week and then sit out the weekend game. We saw earlier this season with Marvin Sordell that he took time to get going and only then did he begin to show any semblance of form on a consistent basis.

Therefore the inclusion of the likes of Kevin Davies will no doubt be a key factor going forward, as we can bring in those who have had a couple of weeks rest and therefore should be raring to go in the closing weeks of the Championship season and this can only benefit us as we try and maintain the run that we are on. We have the likes of David Wheater to return - someone who has experience at Premier League level and someone that can come into the side and bring quality in which can put us above those in and around us.

As Dougie says, it's a squad game and it's the squad that will see us over the finishing line.

Brighton and Hove Albion come to the Reebok Stadium on Saturday in a battle of the form sides in the Championship. Looking back, we have never actually beaten the Seagulls at home in the league - over the years we have faced them thirteen times, with four wins apiece.

Brighton are managed by former Chelsea and Tottenham Hotspur midfielder Gustavo Poyet, assisted by notorious footballing scumbucket Mauricio Taricco. They are not a team to be trifled with - however Wanderers will no doubt be boosted by the unfortunate news that their striker Craig Mackail-Smith is out for the season with an achilles injury.

We have an excellent chance therefore to take the game to Brighton and to really boost our chances of making the Championship Play-Offs. As mentioned above, squad rotation will play a part but I would think that Dougie Freedman will take a look at their centre halves - and Matthew Upson in particular - and think that again Kevin Davies has a track record against this guy, and might go again with him up top with David Ngog. Backup will then again come from the likes of Marvin Sordell and Craig Davies from the bench.

One thing that we mustn't fall victim to is believing that this current run of excellent form is a sign that we can sweep all before us. Brighton have proven themselves to be an excellent side at this level and will form a serious challenge to us in the game on Saturday. We can however overcome this and find the win that will send us further up the table and hamper their own promotion chances as we boost our own.

They have players to watch, regardless of whether Mackail-Smith plays. The likes of Vicente and the Spanish contingent brought in by Poyet have the ability to hurt us, and we must show again that our recent defensive improvements can be maintained.

I would start the game with the same side that began the game against Blackburn Rovers, fitness permitting. I would take the game to Brighton and go for the early goal which served us so well against Hull City and Peterborough.

I am confident. Come on you Whites! 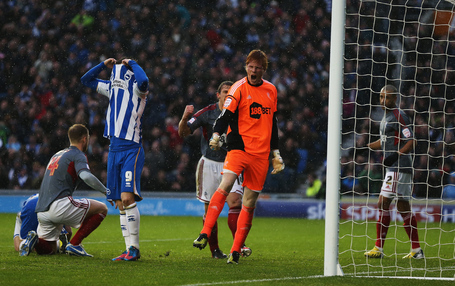