Share All sharing options for: Our ten favourite Kevin Davies moments, part one: Lap of Honour, West Ham, and a Cup Final goal

This summer, the Reebok Stadium will be home to lots of change as Dougie Freedman looks to make his mark on his Bolton Wanderers team. One of those big changes is the conclusion of Kevin Davies' time at the club and with it, the end of an era. Super Kev was the last remnant of the Big Sam Allardyce era with other long-serving Trotters like Jussi Jaaskelainen and Ricardo Gardner having moved on the year before.

Kevin Davies had been an ever-present at Bolton Wanderers for ten years and in that decade, created a number of memories that will last a lifetime. It is impossible to list the all of the moments in which the club captain's actions brought a smile to fans' faces but we did our best to compile a top ten.

At the end of the 2012/2013 season, rumours began to spread that Kevin Davies, long serving centre forward and captain of Bolton Wanderers, was to leave the club. Twitter and Facebook were awash with "in the know" types cryptically referring to a dispute behind the scenes involving Davies and the Bolton hierarchy.

During January of the previous season, and with Bolton facing relegation, it had been mooted that a move to MLS and Stuart Holden's former side Houston Dynamo was a go-er, but instead, Davies signed a new one year contract taking his association with the club into its tenth year.

As the season progressed, Davies was first choice centre forward, much as he had been since signing in July 2003. However, with the team struggling and a new manager, Dougie Freedman, brought in to replace Owen Coyle, change was in the air. Freedman's preference for squad rotation meant that his forward line was often changing, with Davies switching with Marvin Sordell, David Ngog, and new signing Craig Davies on a regular basis.

Davies would go on to make his 400th appearance for the club in an away tie against Watford, however it wasn't too long before things went sour.

On 26th March 2013 Bolton Wanderers announced that Kevin Davies would not have his contract extended into the 2013/14 season, and that the long association that he had had with the club would come to an end.

Most assumed that it would involve a gradual phasing out of Davies from the first team, but instead from that day forward he was never seen in a Bolton Wanderers shirt again, with him initially dropping to the substitutes bench and ultimately dropped from the matchday squad altogether, replaced by his other striking colleagues and even reserve teamer Tom Eaves brought back from a loan spell with Shrewsbury Town.

Therefore it was with great sadness that his final chance of a farewell to the Bolton Wanderers supporters came and went with the final home game of the Championship season at the Reebok Stadium as the Whites faced local rivals Blackpool. The game was must-win for Bolton but again Davies was left in the stands to look on as the team struggled to a 2-2 draw and missed out on the chance to extend their season into the Play-Offs.

At the end of the game, the disappointed crowd remained in their seats for the traditional lap of honour, now known as the lap of ‘thanks' in a ridiculous nod to political-correctness. It was this lap that would offer the fans the last chance to say goodbye and thank-you to Kevin Davies for his years of service.

He emerged first from the tunnel, flanked by his family, and began the trip around the pitch, waving at the supporters who had backed him for nigh on a decade. It was an emotional time for fans and Davies alike, the player shedding tears as the occasion finally got to him. The fans chanted for him, they clapped and cheered, and he gave thanks in return. As he reached the tunnel and disappeared from view for the final time he turned and gave one last wave to the fans and then left, no longer a Wanderer.

It was a poignant and yet fitting way to say goodbye, his contribution never to be forgotten. 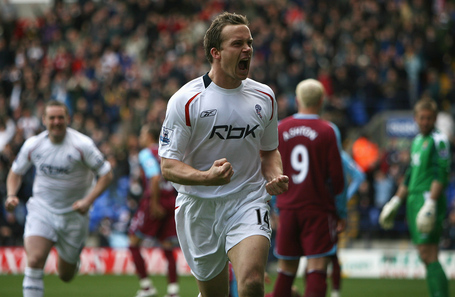 Pre-match festivities were disrupted at the Reebok Stadium before the game, when a group of supporters banded together outside the club's central reception demanding the sacking of Gary Megson on the back of the side not having won in eight league games, and the season coming to a worryingly close end in terms of the battle of relegation.

However, the game had a happier ending than beginning, with Megson's Bolton Wanderers yet again saved by a goal from Kevin Davies, securing a precious 1-0 victory.

Davies' goal in the 47th minute was the 100th strike of his career. He capitalised on defensive confusion between American full back Jonathan Spector and his goalkeeper, Robert Green, to poke home the vital goal and give Wanderers the three points.

The victory left Bolton on 29 points and in 18th position, with just six games remaining. In a stirring run of form, they went on to draw against Tottenham Hotspur and deposed champions Chelsea, as well as beating Sunderland and Middlesbrough in order to guarantee Premier League football at the Reebok Stadium going into the 2008/09 season.

The game also provided one of the enduring images of recent times. In a clash with goalkeeper Robert Green that left the Bolton Wanderers striker on the ground, he dislocated the middle finger of his left hand during a particularly heavy landing. 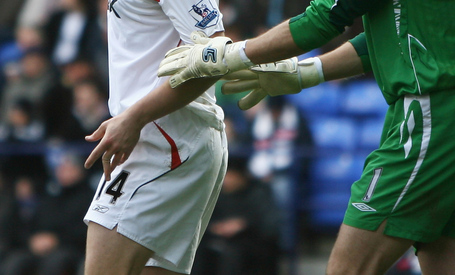 The look of anguish on his face however was soon replaced by one of determination as he was led to the sideline by the club physio who proceeded to put the dislocated finger back in its socket, strap it up and have the player return to the action. 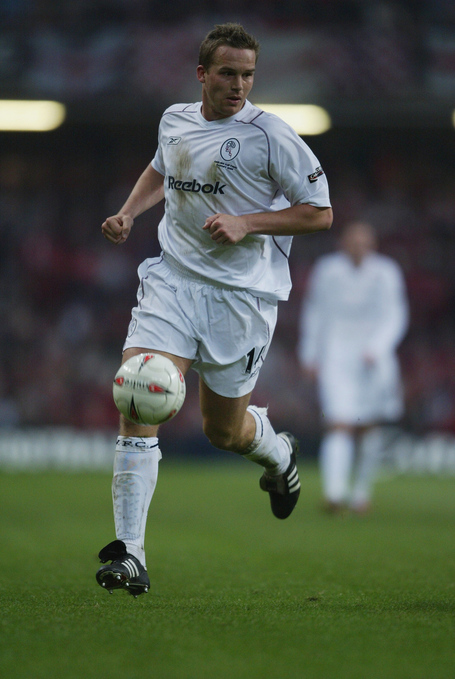 The 2004 Football League Cup Final played between Bolton Wanderers and Middlesbrough at the Millennium Stadium on 29 February 2004. Kevin Davies lined up in an attacking and excited Wanderers side, which included the likes of Bruno N'Gotty, Ivan Campo, Jay Jay Okocha, and Youri Djorkaeff.

Bolton, playing mainly reserve sides along the way, beat the likes of Walsall, Gillingham, Liverpool, Southampton and Aston Villa in order to secure their place in the final held in Cardiff, whilst Wembley was being renovated.

Middlesbrough won the game 2-1 to clinch their first major trophy. Boro forward Joseph-Désiré Job's goal put Boro ahead inside two minutes from a tap-in after a Boudewijn Zenden cross. It was, at the time, the fastest ever scored in a League Cup final. Disastrously five minutes after the first goal, Middlesbrough won a penalty when Job dived after being tripped in the box by Emerson Thome.

Boudewijn Zenden stepped up to take the kick and beat Bolton goalkeeper Jussi Jääskeläinen despite replays and eye-witnesses clearly spotting the Middlesbrough man slipping and kicking the ball twice, in a clear infringement of the rules. Referee and Mr. Burns lookalike, Mike Riley, however chose to disregard this and allowed the goal to stand.

"Middlesbrough had been 2-0 ahead by the seventh minute. Later in the day, however, there was a sourness to the excitement in a match where the referee Mike Riley and his assistants had the feeblest of grasps on the action around them."

"In the 90th minute, the Bolton substitute Stelios Giannakopoulos cracked a shot that had Ugo Ehiogu sprawling to block. Although the centre-back's handling of the ball may not have been specifically intended, he had invited it by the manner in which he spread and hurled himself."

Kevin Davies scored a scrappy consolation goal in the 21st minute when Boro goalkeeper Mark Schwarzer allowed Davies' weak shot to squirm inside his near post, but despite the best efforts of Davies and his teammates the final score remained at 2-1 and the trophy when to Middlesbrough.