This summer, the Reebok Stadium will be home to lots of change as Dougie Freedman looks to make his mark on his Bolton Wanderers team. One of those big changes is the conclusion of Kevin Davies' time at the club and with it, the end of an era. Super Kev was the last remnant of the Big Sam Allardyce era with other long-serving Trotters likeJussi Jaaskelainen and Ricardo Gardner having moved on the year before.

Kevin Davies had been an ever-present at Bolton Wanderers for ten years and in that decade, created a number of memories that will last a lifetime. It is impossible to list the all of the moments in which the club captain's actions brought a smile to fans' faces but we did our best to compile a top ten with photos and gifs. To watch gifs, simply roll your mouse over the image.

If you missed it, part one can be found here.

This is part two:

When long-serving midfielder and club captain Kevin Nolan was sold to Newcastle United for £4m in acrimonious circumstances midway through the 2009 January transfer window, Bolton Wanderers supporters and management had only one man in mind to take over the captaincy.

Davies was appointed captain the day after Nolan left the club and immediately took up the mantle of representing the club and the team.

Tottenham Hotspur arrived at the Reebok Stadium for the first game of the new era, as Bolton looked for their first win in six matches, with manager Gary Megson coming under pressure from supporters as the club headed towards the wrong end of the league table.

The game began at a frantic pace, with the home side taking the lead in the 31st minute with a headed goal from on-loan French defender Sebastien Puygrenier. Davies stepped up in the 64th minute to finish a Gary Cahill flick to make it 2-0.

The Bolton Wanderers supporters became increasingly nervous, as the club had become adept at throwing away leads in must-win games under Megson. This was proven true again as Spurs striker Darren Bent scored two goals in rapid succession to bring the game back to 2-2 and provoke much nail biting in the home end.

However there was a final twist in the tail as the newly appointed club captain stooped in the 84th minute to head in a corner from midfielder Matt Taylor to make it 3-2 to the Wanderers and giving us the precious three points.

Wanderers went on to finish 13th in the division, though in what was a sign of things to come ended the season in poor form, going seven games without victory following a 4-1 demolition of Middlesbrough in the first week of April.

This poor form continued until the following December when he was relieved of his duties, with up-and-coming Burnley manager Owen Coyle given the hot seat. 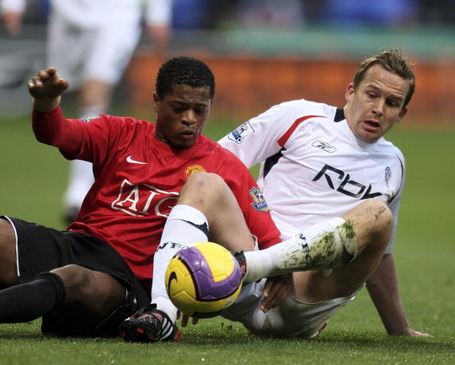 "Last season Ferguson was angered by the forward's physical approach in his encounter with the United full-back Patrice Evra as Bolton upset United at the Reebok."

"Bolton striker Kevin Davies has vowed to give Manchester United's inexperienced back line "a good going over" at the Reebok Stadium.

Sir Alex Ferguson will resist the temptation to recall experienced Rio Ferdinand to his defence, insisting his youngsters can handle the physical test, while calling on referee Andre Marriner to protect goalkeeper David de Gea, in particular."

We all know that Kevin Davies is an "old-fashioned" centre forward: happy with a crunching tackle and someone who loves a tussle with a defender. However, modern football struggles to find a place for this sort of player.

Soon to be ex-Manchester United manager Sir Alex Ferguson is, like Davies, very much of the old school. However, he is also the manager of a huge footballing institution and therefore believes that everything in the game should happen in favour of his side. Whenever Bolton Wanderers dared to challenge his side, Ferguson was riled. Though his team generally won convincingly, there were times when Bolton and Kevin Davies especially got under his skin.

In November of 2007, Wanderers beat United at the Reebok with a goal from then-record signing Nicolas Anelka. The main talking point after the game saw the United manager sent to the stands after a row with referee Mark Clattenburg over a challenge on Patrice Evra by Kevin Davies. The incident landed him with a £10,000 fine and a two-match touchline ban.

One memorable quote from after the game has gone down in Wanderers lore. United defender Patrice Evra said:

"United defender Patrice Evra got a kicking from him when the sides met last November - and is expecting more of the same in this evening's clash at Old Trafford.

"I had more bad tackles in that game than I have in my ENTIRE career.

"His first tackle on me should have been a red card!

"It was the same last year. When Davies kicked me, I said to him ‘Why do you tackle like that?' And he said ‘It's because I don't like you!"

Events like this only further endeared Davies to the Bolton Wanderers supporters. He spent his career putting in the sort of committed challenges that supporters thrive upon and love to see. Although his style of play might not have many supporters in the clubs whose players suffered the challenges, Davies' attitude was celebrated by all at Bolton Wanderers. 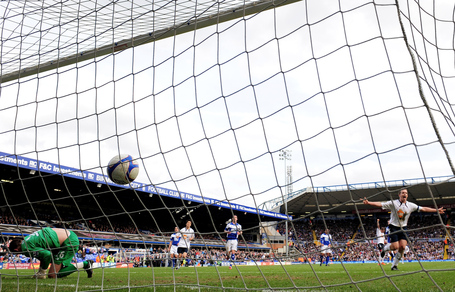 At a club starved of silverware, and as captain, Kevin Davies always maintained that he wanted to reward the fans' loyalty with a trophy. In the 2011 season the club reached the Quarter Final of the FA Cup, drawn against fellow Premier League outfit Birmingham City, led by Scotsman Alex McLeish.

Bolton Wanderers had the chance to reach the last four of the competition for the first time in over a decade, and despite the opposition suffering from injuries within the squad were made to fight til the last minute to secure a Semi Final spot.

Birmingham City were struggling in the fight against relegation from the Premier League, and faced an Owen Coyle-led Bolton side who were enjoying a fine run of form with four victories in five games, supported by the form of American midfielder Stuart Holden who was making a real name for himself in the heart of the team.

Bolton took the lead in the 21st minute with a goal from Swedish letdown, and some time striker, Johan Elmander. Birmingham forward Cameron Jerome equalised before half time. In the 66th minute however Bolton counter-attacked and won a penalty, as Kevin Davies was brought down inside the area by his namesake, Curtis Davies.

Davies had never been a penalty taker in his early years at the club, but under Owen Coyle's instruction had become the first choice taker within the squad. He had a good record up to this point, but there was no doubt that the penalty to potentially take Wanderers into the FA Cup Semi Final was the most pressured penalty that he had to take up to this point in his career.

Of course, Davies showed the character and the ability to handle pressure that we all expected of him, and he buried the penalty past Birmingham City and England goalkeeper Ben Foster.

Although Birmingham again equalised through 76-year-old forward Kevin Phillips, there was a further twist in the tail.

A replay looked on the cards as the game moved into injury time, only for Kevin Davies to step up to the plate again to set up Chung-Yong Lee goal, nodded in from six yards for a Bolton win, sending the assembled away fans into delirious celebrations.

The less said about the Semi Final the better, but this was a truly memorable moment and sparked some of the wildest celebrations ever seen amongst Bolton Wanderers supporters.