Ahead of tomorrow’s unveiling of the new BWFC home strip, the club are also pleased to introduce its new club crest. twitter.com/OfficialBWFC/s…

One month ago, Lion of Vienna Suite broke the news that Bolton Wanderers were set for a revamped badge, most likely returning to the famous Lancashire Rose that adorned the club crest for decades. Now, a nearly a full month later, Bolton Wanderers have announced the brand new badge that will represent the Men in White. The badge change is Bolton's first in 16 years.

The new badge leaked this morning via the club's own shop site and it looks great. The club acted fairly quickly in fixing their mistake and taking the images down but not before many fans saw the new look.

UPDATE: The image can be seen here.

The badge returns to the classic banner and rose that sat under the circular BWFC emblem for many years, albeit with a modernized look. The new kit's navy blue shirts will bear a white emblem with red banner and white rose. The shirt will presumably replace the white with navy blue. It also looks as though the year "1877" is below the rose, marking the club's founding as Bolton Wanderers (having been Christ Church FC for a few years before that).

The last switch saw the Trotters move from the circular BWFC emblem above the Lancashire rose to the now-famous red-and-blue ribbons. The current badge first appeared on the side of the then-new Reebok Stadium in 1997 before making its way onto the kits five years later in 2002.

Last season, after 22 years, Bolton Wanderers switched their kit supplier from Reebok to adidas, who had purchased the Bolton-born sportswear company a few years earlier. The supplier change was prompted by Reebok simply exiting the football market with Bolton Wanderers one of the last few teams to wear equipment by the local manufacturer.

The adidas change brought brand new kits and apparel to Bolton Wanderers that were much more reserved and arguably classier than the last few years of Reebok equipment. The move had largely gone over well with the fans as Bolton went out in a sublime white shirt with three red stripes running down the shoulders.

The official reveal (with official photos) is tomorrow, 6 June 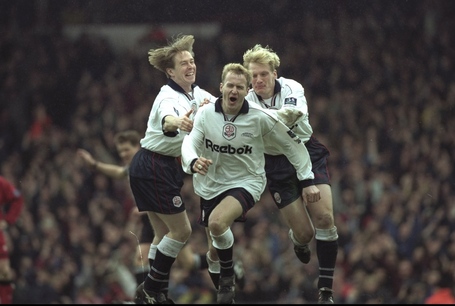