It appears that Bolton Wanderers' club shop website is at it once again, leaking details of the club's upcoming away kit. When we last checked in about a week ago, the site had leaked a bit of information regarding the away shorts and socks. Thanks to Sam for the spot.

Per the club's shop, fans could expect navy blue and red socks (think of the color combination of the 2009/10 bar code away kit) and a bright red pair of shorts in an adidas-branded color called "Infrared." That color is a very eye-catching shade of red that is currently used on the f50 adizero boot (worn by Medo Kamara, Marvin Sordell, and David Ngog, among others). There were hints that this combination could perhaps mean a navy blue away shirt or a throwback to the red 1988/89 Normid strip that was a fan favorite.

A bit of new information has appeared on Bolton's club shop website in a post titled "Shirt 1314 Away." Per the website, the shirt will come in a color called "Electricty" that adidas use very frequently. Electricity, a fluorescent yellow/green color is just as bright as it sounds. Many fans will remember the extremely bright Chelsea way shirts from the 2007/08 season (above). Stoke City are using a similar color in their away shirts this year (below). While the details are light, it is possible that the apparent electricity shirt may be used as part of a third kit.

UPDATE: Another away shirt has appeared on the site with a color dubbed "Bluebird." This one looks very similar to a cobalt blue and is slightly lighter than the background of the club shop's website. It'll be more blue than the periwinkle-ish 2010/11 away shirt. 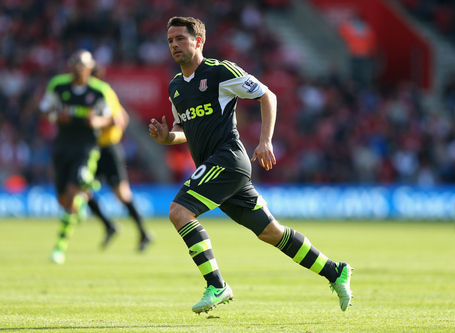