Share All sharing options for: Stu Holden shines on defense

On Tuesday evening, the United States Men's National Team faced off against Costa Rica for what would be their first real test against opposition of a decent caliber in the Gold Cup. US coach Jurgen Klinsmann made a number of changes to the American side, especially in the midfield. Kyle Beckerman, arguably the star in the win against Cuba, was replaced with a more attacking option in Mix Diskerud while the wide options in the previous match, Joe Corona and Brek Shea, were replaced by Alejandro Bedoya and Jose Francisco Torres.

The Americans, with a more attacking starting lineup than what was on show against Cuba, struggled to break through the Costa Rican defense in the first half, barely troubling goalkeeper Patrick Pemberton. It took some second half substitutions for the Americans to finally make the breakthrough in what would ultimately be a 1-0 win. A good stop by American goalkeeper Sean Johnson on the defensive end started a quick counterattack with the ball finding Landon Donovan on the right wing. The American legend released Brek Shea first time, seeing the Stoke City winger running into space and taking him one-on-one with Pemberton, finishing well. 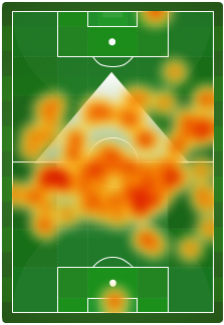 Stu Holden, who started and went the full 90 minutes in a competitive fixture for the first time in nearly two years, had a different role to play than what was assigned to him against Cuba. With Mix Diskerud in, Stu was expected to be the more reserved midfielder, helping the central defensive pairing of Michael Orozco Fiscal and Clarence Goodson clear up any messes. Stu, supporting Diskerud ahead of him, spent the vast majority of his time in the defensive half of the field. 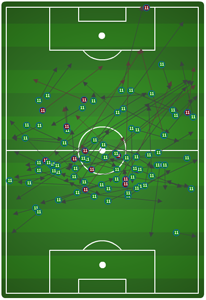 Holden, who really struggled playing balls forward against Cuba, bettered his passing all around against Costa Rica. On Saturday, in the Cuba match, Holden completed 48 of 61 passes with a 78% accuracy rating. On Tuesday night in Hartford, Holden 70 of 84 for an 83% accuracy rating. In addition to that, Holden had a much better time going forward, playing a number of good balls into the attacking third and more specifically, the penalty area.

Over the course of the the match, many of the passes that Stu Holden played found their way to the right flank, where Alejandro Bedoya and Michael Parkhurst were operating. He also tried to find Chris Wondolowski in the area but many of those balls were stopped by defenders closely marking the forward. Wondolowski, who has a fantastic eye for goal,i is let down by his lack of pace. As such, he compensates by starting his runs early and looking to beat the line on balls into the area. Holden tried to assist there but could not make the difference with the Costa Rican defense hot on Wondo's heels.

Finally, Stu was strong on the night in loose ball situations. The Bolton Wanderers midfielder recovered five loose balls, won a pair of tackles cleanly, made four interceptions, and cleared one ball. That last one, the clearance, was perhaps the most impressive as it came on a Costa Rica corner. Holden, marking a man in the six yard box, got his head on a ball flung in with pace and headed behind for a corner, saving Sean Johnson from having to make a play.

Against Costa Rica, Holden showed his ability to recover from a tough outing as well as his versatility in midfield. On top of that, Stu went the full 90 minutes, taking a major step towards a return to full fitness. The Americans will now take on El Salvador in Baltimore on Sunday night in a Gold Cup quarterfinal clash. The winner will take on the victor of Honduras v. Costa Rica at Cowboys Stadium in Dallas.