Bolton's away kit is brash, bright, a bit ugly, and I love it

Share All sharing options for: Bolton's away kit is brash, bright, a bit ugly, and I love it

For one reason or another, Bolton Wanderers decided to launch their brand new away kit at midnight local time. For fans in England, this meant a late bedtime if they wanted to get eyes on the new look as soon as it dropped. The club and adidas did a very good job of keeping the shirt completely under wraps with just about nothing leaking. Because of that, fans had to take the entire thing all in at once rather than having to get used to the shirt and its bright colors little by little.

The new shirt is based on a template, which has become the norm. For those unaware, adidas and other football gear manufacturers release a number of templates every year and base every kit design for every team on those templates. There are very few teams in the world that get new designs that they can call their own anymore. Chelsea and Bayern Munich share a template, as do AC Milan and Aberdeen with the list going on and on. Bolton's home kit is based on the same template as that of Heart of Midlothian and Hull City's away shirt, among others. It's not just an adidas thing either, Nike has been doing the same thing for most of its teams recently with Manchester United's new home shirt based on England's away and with Manchester City's third shirt shares Blackburn Rovers' away template.

The Trotters' 2013/14 away/change (whatever you want to call it) is another one of those shirts based on a template. Wanderers will share the look with five different Premier League teams in Hull City's home shirt, Southampton's home shirt, Stoke city's change shirt, Swansea's home, and West Bromwich Albion's home & away. Though based on the same overarching design, each shirt has its own unique aspects. Hull has its traditional black and orange stripes, Stoke City have "electricity" on their sleeves, Swansea look like they're mourning someone, and so on. Bolton's is a simple take on the template but in a color that adidas have not used on the other shirts. 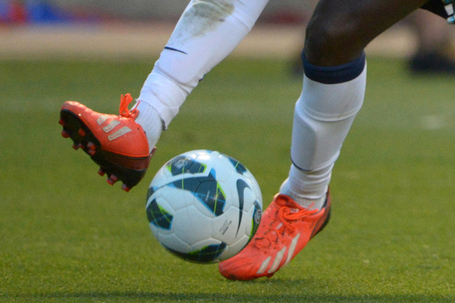 "Infrared," as adidas have dubbed it, is a very deep, bright red with an orange tint, almost like a dark salmon color. Bolton's shirt has navy blue accents including on the sleeves, the adidas stripes, neckline insert, and the new Wanderers crest and is paired with shorts of the same color. The socks, mainly "infrared," have navy blue stripes to tie the change kit to the home look. 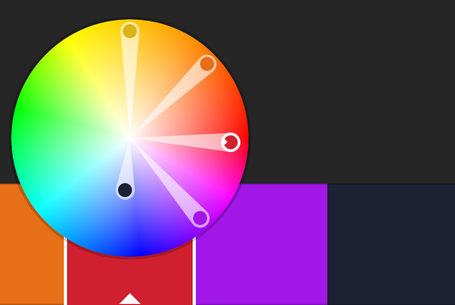 The color wheel with a shade of Infrared in the center and navy on the right.

The two colors, "infrared" and navy, probably shouldn't work together but they do. Those that understand color theory can see why. When you look at the color wheel, above, the two colors are close to each other on the wheel but are a little too far apart, steps wise, to be analogous. They're too close to be complementary or work in a triad.

The template that adidas chose is really far from the best one that they're offering but it's also far from the worst. Wanderers fans should count themselves lucky that they don't have the zig-zaggy effort that is Swansea's away shirt or the misplaced triangle on Fulham's home shirt.

Perhaps what is best about Bolton's new away kit is that it is mostly a departure from what Wanderers have worn over the last decade or so. Last season, Bolton wore a navy & black number as their away shirt with a grey and red alternate. The year before that was black & yellow and the Trotters wore a light blue/periwinkle shirt in 2010. Before that came the navy blue and red "barcode" kit and 2008 had the yellow "sports bra" look. In 2007, Wanderers had a wonderful black and cyan effort and the year before that was maroon. Over the course of the last decade, it's been a steady stream of black, blue, and yellow away shirts with the occasional departure to red/maroon or gray. Even the yellows that Wanderers have worn have been muted compared to the likes of Norwich City or the "electricity" goalkeeper kit that Adam Bogdan will wear this year.

The "infrared" kit most closely resembles Bolton's effort from a decade ago, a red number with navy blue sleeves but replaces the navy shorts with the "infrared color." The 2003/04 away kit (above) was certainly a good-looking one despite reoccurring objections from fans about Wanderers and red kits. Fans' opinions on the new look are certainly split, ranging from "love it" to "surprised people seem to like it, its horrible" and everything in between. One thing that everyone seems to agree on is that Wanderers will certainly stand out.