Bolton's Eleven: Sort of like Ocean's, but slightly less glamourous

Our man in the stands Chris Manning takes a look back at notable wearers of the Bolton Wanderers number 11 shirt over the previous years as we look to the future with newest incumbent Rob Hall.

Following the signing of Rob Hall on 1st July, and the image of him holding up the new Wanderers shirt whilst wearing a club jumper with the squad number "11," I got to thinking, whilst driving home from work navigating the wild roads of Preston, about that particular shirt number.

Over the last decade, the most recognisable Bolton Wanderers #11 has of course been Ricardo Gardner, who, before leaving the club in May 2012, had made 300-odd appearances, wearing the same shirt number since arriving at Bolton from Jamaica in 1998. However, previous to that, the shirt had many other notable wearers, and I shall look at my favourite few: 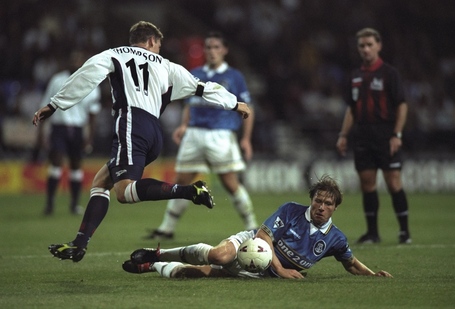 Signed from Newcastle United in 1993 for £250,000 by legendary Bolton Wanderers manager Bruce Rioch, the Geordie left winger went on to make over 150 appearances for the club.

Whilst not blessed with rapid pace, Thompson was excellent on the wing, offering accurate crossing and blockbuster shooting from distance. He scored for the club in the 1995 League Cup Final defeat to Liverpool, and also scored the first ever goal at the club's new Reebok Stadium against Tottenham Hotspur.

Throughout his time at the club, Thompson was linked to moves elsewhere. That time finally came about in 1998 when he moved to Aston Villa for £4.25m. His stay at Villa was short, only 40 appearances worth, before he moved on again this time to Celtic for £2.75m where he again made over 150 appearances for the club. He also made his long-awaited and well deserved England debut in 2004, when Sven Goran Eriksson (more like Sven ORGAN Eriksson - amirite??) gave him a thrilling 45 minutes against Sweden in an international friendly.

Thompson's career wound down with a move to Leeds United in 2007, and finished in 2008 with a loan spell at Hartlepool United at the age of 35. He moved into coaching back with Newcastle United and then Celtic before leaving the Scottish club in 2012.

I'll always remember Thompson as a reliable and hard-working member of one of my favourite Bolton Wanderers sides. His presence on the left wing was an obvious choice for Rioch and under Todd, and his long-range goals such as the smacker of a free-kick against Aston Villa, the League Cup goal in 1995 against Liverpool and his frequent appearances out on the beer most weekends in Bolton town centre. 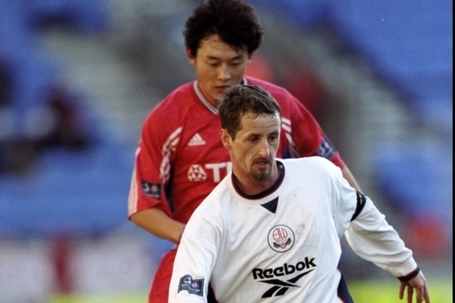 Blessed with the best left foot I have ever seen, Scott Sellars was usually employed in the centre of midfield, though on occasion would be used as a left-winger. Therefore, despite this controversial addition to the #11 hall of fame, Sellars absolutely deserves his mention.

Signing for Bolton Wanderers in 1995, Sellars moved to the club from Newcastle United, having previously had a spell at neighbours Blackburn Rovers. He joined the club at a time of some turmoil, arriving under the stewardship of Colin Todd after the failed "joint manager" experiment of 1995 that led to the club being relegated from the Premier League.

Sellars came into his own in the following season, where he was rotated with Alan Thompson on the left hand side of the Bolton Wanderers midfield. Over his four years with the club he made 110 appearances, scoring fifteen goals.

My favourite Scott Sellars moment has to be the night that Bolton Wanderers clinched the 1997 First Division Championship title away to Manchester City at a packed Maine Road. Listening on the radio at home (was a school night, and even local away days were forbidden on school nights), goals from Mixu Paatelainen and Scott Sellars gave Wanderers a 2-1 victory and secured the title.

Sellars left Bolton Wanderers in 1999 after the move to the Reebok Stadium, joining Huddersfield Town. After his spell in Yorkshire he moved to Denmark, playing for AGF Aarhus before retiring in 2003 after a season with Mansfield Town.

Since hanging up his boots Sellars has been involved in coaching - starting off as Assistant Manager at Chesterfield before in 2009 joining Manchester City as an Academy Coach, a post he holds to this day. 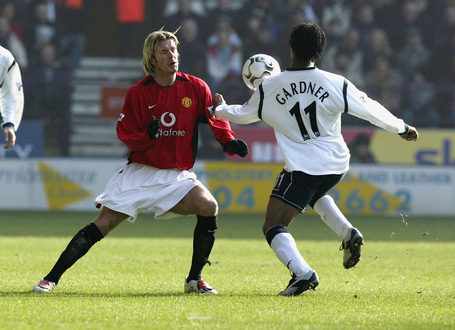 Arguably the most famous holder of the #11 shirt in the modern era, Ricardo Gardner was signed by Colin Todd from Jamaican side Harbour View, where he had made his debut at 14 years old, following the 1998 World Cup for a fee of £1m.

Making his debut in the League Cup in August of 1998, Gardner went on to make his league debut two weeks later against West Bromwich Albion, scoring the winner in a 3-2 victory for Bolton Wanderers. His first season was a success, making 22 appearances, mostly from the bench.

His second season was equally successful, however it finished on a sour note as he suffered a serious cruciate knee injury which kept him out of the side for almost a year.

The early portion of his Bolton Wanderers career saw Gardner utilised as an orthodox left winger, however the arrival of ex-player Sam Allardyce as the manager in 1999 would see a change in policy and the introduction of Ricardo Gardner the left back. He would switch between positions as and when needed, offering versatility and consistency.

His goal against Preston North End in the 2001 Play Off Final, capping a 3-0 win for the Whites, will live long in the memory. His performance that day showed just why the club had invested the money into the player, though few would anticipate that he was one day make over 400 appearances for the club.

Over the next few years Gardner would make the left-back position his own, though following the departure of Allardyce and then his replacement Sammy Lee, the arrival of new manager Gary Megson would see Gardner become more of a squad member and less of a must-pick. Megson employed Gardner in central midfield, believing that the player could bring energy and creativity to the position.

The crowning glory of Ricardo Gardner's Bolton Wanderers career came in the Allianz Arena, Munich, in November 2007. Though that berk Megson picked a reserve XI with the intention of getting us knocked out, it did actually go on to provide one of the best nights in the history of the club. Gardner's first goal in five years gave the club the lead, as we would go on to draw 2-2 with the German giants.

The following seasons saw Gardner's game time become less and less, eventually joining local side Preston North End in 2011 on a short loan. However following the spell injury would strike again and often, leaving Wanderers with little choice but to end the Jamaican's time at the club in 2012 following over 400 games for Bolton Wanderers.

[Photo not available because duh]