13.5 years since Bolton last played against a manager they sacked, streak to end with Owen & Wigan

Share All sharing options for: 13.5 years since Bolton last played against a manager they sacked, streak to end with Owen & Wigan

Managers and managers come and go relatively often. Such is the reality of football. Some are loved and some are hated. Some bring reputations with them and some, for better or for worse, earn them. Over the last six years, Bolton Wanderers have had five different managers, excluding caretakers. Sam Allardyce, Sammy Lee, Gary Megson, Owen Coyle, and Dougie Freedman are the men that have taken up the post. Three of those men left the post after having been sacked by Bolton Wanderers.

Yet, despite those three men (Lee, Megson, and Coyle) leaving the post on unfavorable terms, Wanderers have not yet been able to play against a team with one of those three men leading the opposition as manager. That will of course change on Sunday, the 15th of December, when the Trotters travel to the DW Stadium to take on Wigan Athletic and Owen Coyle for the first time this season. It will be the two teams' first meeting since February, 2012 when the Latics beat Bolton 1-2 at the Reebok Stadium.

Sure, Bolton have faced previous managers before. The Trotters saw Big Sam on a number of occasions after he left Wanderers, managing Newcastle United and Blackburn Rovers but Allardyce was not sacked by Bolton. Sammy Lee, Allardyce's successor, on the other hand, was. Wanderers did face Lee's Liverpool a number of different times after Little Sam's short tenure as Bolton manager, including his first time returning to the Reebok in November, 2008. Bolton would face off against Sammy Lee as the assistant to Rafa Benitez, Roy Hodgson, and Kenny Dalglish but never as Liverpool's manager.

No, Bolton Wanderers have not faced a manager they sacked in some 13-and-a-half years. That manager was Roy McFarland, who was appointed following Bruce Rioch's move to Arsenal. McFarland only managed to make it to New Year's Day of the 1995/1996 season with the Trotters playing, by and large, terribly. His squad was full of fan favorites, many of which were signed by Rioch, who had promoted Bolton to the Premier League the previous season. The team included the likes of Keith Branagan, Jimmy Phillips, Gudni Bergsson, David Lee, Mixu Paatelainen, John McGinlay, Fabian de Freitas, and more. Despite those names, McFarland's Bolton were dead last in the Premier League for large parts of the season, ultimately ending the year in 20th on 29 points (ten points from safety) and succumbing to relegation back to the First Division alongside Manchester City and Queens Park Rangers.

Midway through the season (New Year's Day to be exact), McFarland was sacked and Colin Todd was installed as Bolton's manager. Todd failed to stave off relegation for Wanderers but improved their form so much in the second half of the season that he was handed the post permanently. The following year, Todd's Bolton won the First Division and were back in the top flight for the 1997/98 season.

Bolton's history with short-term manager Roy McFarland was not yet done. Following his time with the Trotters, McFarland took over at Cambridge United. He would spend just over four-and-a-half years at United and that is where he would take on the Trotters. 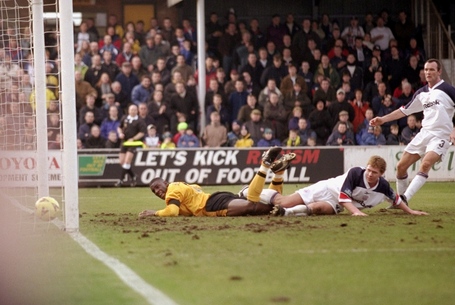 It was the 1999-2000 season and Cambridge United were struggling in the old Second Division while Bolton Wanderers pushed for the Division One playoffs with Sam Allardyce at the helm. The two teams would meet in the fifth round of the FA Cup with Bolton Wanderers having beaten Cardiff City and Grimsby Town to reach that point. Cambridge's road was tougher, having entered the competition earlier and having to make it past Gateshead, Bamber Bridge, Crystal Palace, and Wrexham to face Bolton.

The match was played at United's Abbey Stadium on the 29th of January, 2000. The Trotters were coming off a League Cup semi-final loss to Tranmere Rover earlier in the week, missing out on a final place in Wembley for a match that Rovers would ultimately lose, 1-2 to Leicester City.

Cambridge had hoped to add to the pain and looked good to do so, scoring first against Bolton in their FA Cup clash. Trevor Benjamin opened the scoring just shy of the half-hour mark from a corner kick and United were 1-0 up. Bolton Wanderers would reply in the second half, thanks to some wise substitutions from Big Sam. Ricardo Gardner, who came on five minutes after the break, cleared up a poor Bolton corner on 57 minutes and sent a lofted cross in for Bob Taylor, who turned and fired home to equalize. On 75 minutes, it was Ricardo Gardner playing provider once more, this time sending in a low cross for Taylor who would score his second of the match and put Wanderers ahead. Bolton would stick the dagger into Cambridge in the 86th minute with Eidur Gudjohnsen scoring following a defensive error from United.

With that, Cambridge crashed out and Bolton Wanderers continued their excellent run. Wanderers would go on to beat Charlton 1-0 with another Gudjohnsen goal in the quarter-finals and went on to face Aston Villa in the semis. The semi-final would end 0-0 with Villa going through on penalties. Goalkeeper David James saved two Bolton attempts as the Trotters would lose 1-4, leaving the competition.

Bolton Wanderers have not come up against a former manager that they have sacked since that match in January, 2000. That will all change next season with a pair of matches against Wigan, assuming Owen Coyle hasn't been sacked yet.