UPDATE: Good friend of the site, Stuart Obertelli, was kind enough to send along a pair of photos showing off the progress of the signage on the Reebok Stadium. Looking out from Burnden Way, you can clearly see that the ribbon crest on the right side of the entrance is still gone while progress on the left side is happening quickly. More updates as we have them. 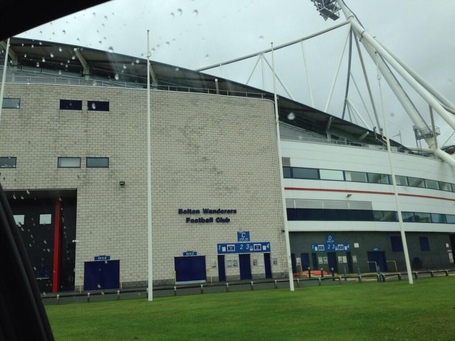 When Bolton Wanderers first confirmed their new crest (the return of the rose, as we called it) earlier this summer, one of the questions asked was what would happen to the giant badge on the side of the Reebok Stadium. The old crest, bearing the circular BWFC emblem with ribbons flowing underneath it, was part of the Reebok Stadium from its launch in 1997, even prior to the placement of said crest on the kits.

Ahead of tomorrow's unveiling of the new BWFC home strip, the club are also pleased to introduce its new club crest. pic.twitter.com/9gKhJHGBqK

When the new crest was announced, the club made a point of saying that the old one would stay on the stadium. Per that original release:

The existing ribbon-style crest that was introduced following the move to the Reebok Stadium in 1997 will remain in place as the club's stadium crest.

One of the main reasons for this was of course the sheer cost of replacing the existing signage. In addition to having the new badge fabricated with enormous scale in mind, there are also costs to removing, dismantling, and disposing of the old signage. Wanderers are in a mountain of debt and it was understandable that they wanted to keep the original signage.

Wanderers are set for their home opener this weekend against Reading and it looks like the stadium will undergo a relatively major cosmetic change ahead of that. Earlier in the day, a photo emerged on Twitter from what appears to be the offices across from the Reebok showing crews removing the ribbon crest from the Reebok Stadium.

Whether we'll see the new crest on their before the weekend remains to be seen but it looks like the crews will have to get a bit of soap and water onto the brickwork to make it nice and pretty.