On This Day: Remembering the Burnden Park Disaster

Share All sharing options for: On This Day: Remembering the Burnden Park Disaster

Today marks the 68th anniversary of the Burnden Park Disaster in which 33 home supporters lost their lives, with hundreds more suffering injuries in the crush.

It was the worst stadium-related disaster in British sporting history at the time, and would remain so until the Ibrox Park, Glasgow disaster in 1971 when 66 people died and over 200 were left injured

Speaking to the Bolton Revisited website, Wanderers supporter Alf Ashworth was in the home crowd that day:

"Bolton Wanderers were playing Stoke City in the 2nd leg of the 6th round of the FA Cup at Burnden Park, Bolton. The 1st leg had been played at Stoke and resulted in a win for Bolton, Ray Westwood scoring 2 goals for Bolton.

Besides a lot of local interest, people came from far and wide because this was the first year the FA Cup was being played for after the War, and things had started to get back to normal. Players were coming back home from the forces, and players like Stanley Matthews for Stoke, Ray Westwood for Bolton, both international players were in the teams that day.

It was in this kind of atmosphere that my brother Bill and myself decided to go to the match that day, and we paid at the turnstiles, no tickets in those days.

We decided to go in the Great Lever Stand, (opposite end to where the tragedy occurred), which was covered from the elements, there were no seats on the Great Lever or Bolton sides of the grounds, and we stood about halfway up the Stand just to the left of the goals looking on to the pitch. The Kick off was 3pm. We had queued for sometime and eventually got into the ground about 1-45pm.

Entrance to the Bolton End of the ground which had no roof, and where the disaster happened, was from Manchester Road only. Going through the turnstiles and on the right was a Bar where pies and drinks could be obtained, and people used to congregate round this bar, and would not move from there.

About 2pm, looking from Great Lever End towards Bolton End to left of the goals there was a mass of faces and no spaces between these faces, (this is where the tragedy occurred), whilst farther over it was evident that there was room, but people would not move over to the Burnden side of the ground, but also it could be seen that people were climbing into the ground from the Railway, so they didn't pay.

The official attendance was over 65000, but I think there were many more.

The match started, everything going well, then we saw the crowd spilling on to the football field and we did not know nor realize what was happening. The players left the field and people were being carried off on stretchers, some of these had their arms dangling over the side, I thought they look dead. Eventually the players came back (after about half an hour) and the game continued and finished a no score draw. Bolton won on aggregate, and entered the FA Cup Semi Final.

There were rumours going round that 17 people had died, Bill and myself lived on Hall-ith-Wood estate and we walked home from Burnden Park. On our way home, we were asked a few times had we been to the match and what had happened"

The disaster happened at the Railway End of the ground where, in common with many other post-war grounds, facilities were rudimentary. The bank was crude, just dirt with odd flagstones for steps. Although there was room towards the Burnden side of the ground, part of the stand had been requisitioned by the Ministry of Supply and it had not yet been returned to normal use following the war.

In addition, the turnstiles at the east end of the Railway Embankment which adjoined the Burnden Stand had been closed since 1940. 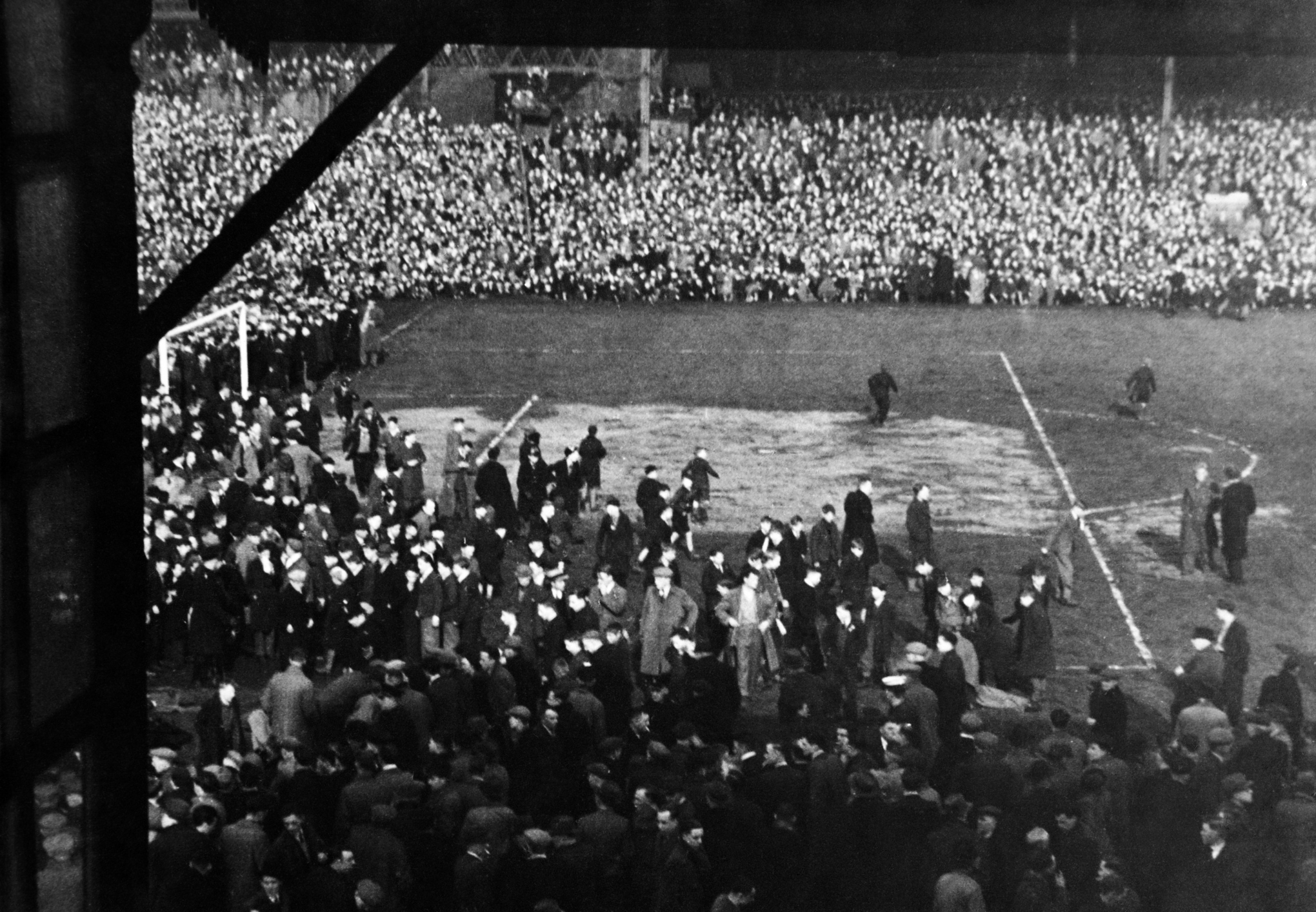 Speaking later to the BBC, another spectator, Bill Cheeseman, said:

"It was such a crush. It was getting dangerous. We were getting squeezed by the people in front and behind. Everyone was pushing,"

"All of a sudden those that were in front of us seemed to go - all falling down like a pack of cards.

"We managed to get out and I was glad about that.

They, like many fans, were not aware of the full extent of the disaster until they heard the news"

The game was restarted but was quickly halted again when a police officer came onto the pitch to speak to the referee, George Dutton, to inform him there had been a fatality in the stand. He, in turn, called the two captains, Bolton's Harry Hubbick and Stoke's Neil Franklin, together to inform them and the players left the pitch.

The dead and injured were taken from the stand, with those who had perished lain along the touchline and covered in coats.

A little under half an hour after leaving the pitch, the game was restarted, with a new sawdust lined touchline separating the players from the bodies. At the end of the first-half, the players immediately changed ends and started the second half. Stanley Matthews was on the Stoke team, and later said he was sickened that the game was allowed to continue.

The disaster brought about the Moelwyn Hughes report, which recommended more rigorous control of crowd sizes.

The report recommended more rigorous control of crowd sizes. A conference on the licensing and regulation of sports grounds where it was recommended that, as a voluntary code, local authorities should inspect grounds with a capacity of 10,000 spectators and agreed safely limits should be in place for grounds of more than 25,000 capacity. Turnstiles should mechanically record spectator numbers and grounds should have internal telephone systems.

The Burnden Park disaster was the greatest tragedy in British football history until the Ibrox Park disaster at Rangers' home ground in 1971. Following Bolton Wanderers moving to a new ground, a memorial plaque was placed at the site of the tragedy, now a supermarket, in 2000.