After progressing through a local, and then regional competition pupils from Bolton School Boys' Division Junior school were given the chance to represent the north, playing against their southern counterparts, AFC Bournemouth.

The day will live long in the the memory for the year 6 pupils as they were triumphant, winning 1-3 on Wembley's hallowed turf.

Despite the scoreline, it was an extremely close-fought game with both sides representing their school and town with pride. The Chorley New Road based school started the game slowly, and paid the price early on as St James' school from Bournemouth took an early lead. After a brilliant instinct save tipping the ball onto the crossbar from Bolton's goalkeeper, Jensen Myerscough, the ball fell kindly for the Bournemouth striker, who bundled the ball home from 4 yards out.

The early setback appeared to have a positive impact on the boys from Park Road, as they responded positively, threatening former Cherries keeper Vince Bartram's son's goal. After a period of sustained pressure from Bolton, a goal was on the cards and their breakthrough came from the penalty spot. After patient build up play referee, Ian Hussin, awarded a penalty after Jameson Gobola went down under a careless Bournemouth challenge.

Jameson Goloba wasn't unnerved by the occasion and calmly slotted away his penalty past the despairing St James' goalkeeper. 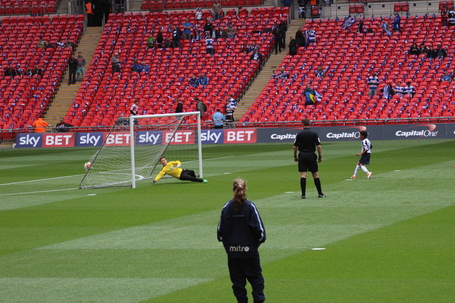 With their newfound confidence the boys started the second half brightly and consequently found themselves ahead early on. Despite a good initial save from the Cherries' goalkeeper, Joshua Stephenson's shot trickled in which sparked scenes of jubilation amongst the Bolton boys.

With only minutes remaining Cian Spencer-McDermott ensured Bolton's victory. He scored Bolton's third from a stunning free-kick from 20 yards out. This settled some of the boys' nerves, but mainly their parents', who had been encouraging them since the first whistle. 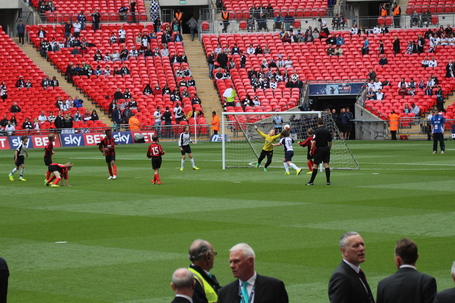 The pupils and Bolton Wanderers representatives then made the famous walk up the steps to receive their trophy after they became national champions! After a brief moment imitating their idols and posing for various photos they were greeted by their proud parents.

More than 12,000 children set out on 'The Road to Wembley' earlier on in the year, so to reach the national final was a commendable achievement alone. Reports from inside the camp indicate that the pupils behaved impeccably throughout the duration of their stay in London. Their conduct on the pitch was also brilliant, as they showed acts of sportsmanship throughout the final. A special thank you also goes out to Mike Duxbury, Andy Woodhead, Katie Bent and Jayne Jackson who played an integral part in the boys' success and enjoyment.

The pupils represented their school and town with pride and were great ambassadors for the north. We'd like to congratulate them on becoming national champions, and showing Bolton Wanderers' senior squad how to be successful at Wembley. 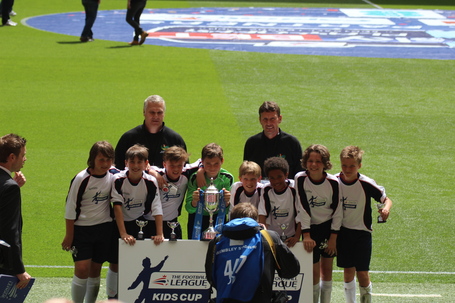