Jonas embarks on a culinary journey in support of three teams on World Cup Match Day 11. First up, breakfast, and Belgium vs. Russia.

When one has a rooting interest in a match sometimes the superstitious of us like to try to do little things in our lives to help nudge our squads to victory. So, finding myself in the position of having a clear favorite in each of the three matches on World Cup Match Day 11, I undertook the project of preparing three meals that would reflect the cuisine of my three favorite. 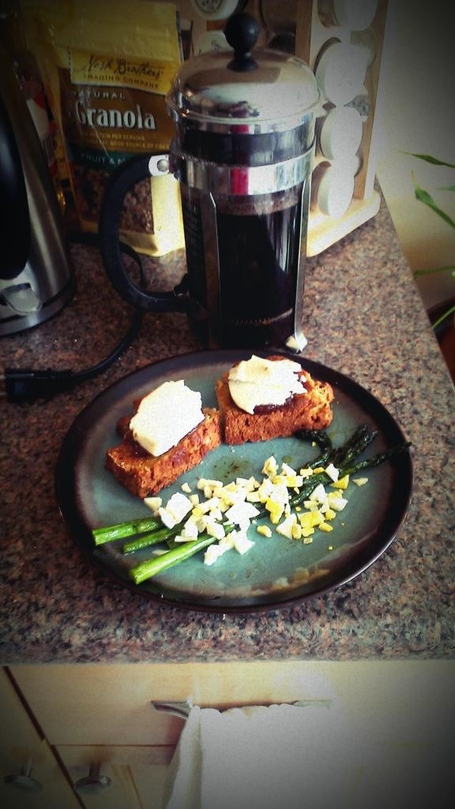 Pictured above is a simple but relatively traditional Belgian breakfast and one that speaks to both the Dutch and French cultures intermingled in Belgium. The Dutch roots of Belgium bring a thick slice of homemade bread, toasted and topped with preserves and a slice of mild Gouda cheese. This was accompanied by sautéed asparagus topped with chopped hardboiled eggs, a nod to French-Belgian cuisine.

The first half saw both teams come out playing a 4-2-3-1.  Belgium once again played four natural center backs across the backline. While Russia made two changes to their starting lineup from the South Korea match, neither of the changes was replacing Igor Akinfeev in goal after his howler in the first match. The first half was a very drab affair; at points Belgium had the majority of the possession at 53% to 47%, but rarely looked goal dangerous, while the Russians had the better of the chances attacking on the counter, especially down the ride side of the Belgian defense.

Russia’s first chance came on the counter in the 12th minute with Victor Fayzulin cracking a shot on the Belgian goal from top of the 18 yard box that keeper Thiabaut Courtouis parried away. Belgium held most of the possession for the next 15 minutes with attacking midfielder Dries Mertens looking dangerous off the dribble and creating a number of shots, but the Belgians did not manage to get any of those shots on target.

In the 30th minutes Belgian defender Thomas Vermaelen was taken off after a minor knee injury he suffered during warm-ups flared up and prevented the current Arsenal, and prospective Manchester United, defender from continuing. He was replaced by Tottenham Hotspur defender, Jan Vertonghen, who looked much better than Vermaelen supporting the attack going forward.

The best chance of the half was created by Russia in the 44th minute. Again, Russia sprang a counter down the right side of the Belgian defense. Denis Glushakov sent a pinpoint looping cross into the area, and Russian striker Aleksandr Kokorin wriggled free of his Belgian markers for a free header 8 yards from goal. However, the striker put the effort wide, and the half would send scoreless for both sides.

The second half was a plodding affair until the final ten minutes. The Belgians looked disinterested and lacking in ideas, and while the Russians looked more dangerous going forward, their crosses were largely dealt with by the four center back Belgian defense.

However, once the 80th minute rolled around the chances started coming. The Russians got things rolling in the 81st minute with a low hard shot from the full back Eschenko that rolled just wide of Courtois’s post. Three minutes later, the Belgians earned a free kick in the center of the park about 25 yards from goal. Everton man, Kevin Mirallas, sent the free kick low and around the wall that appeared to have Akinfeev beaten, but it clanged off the post and was cleared by Russia. The breakthrough finally came in the 88th minute with Belgium nominally on the counter. Eden Hazard finally showed his quality by dribbling past two Russian defenders and getting to the endline inside the box. Hazard played the ball back to second half substitute, Origi, who finished with a rocket in the back of the Russian net. This would prove to be the decider.

Like their first match, the Belgians left it ‘til late to appear to become interested and start to assert their talent advantage in the match. Russia again attacked well down the flanks, but was left without a better result that perhaps they deserved. With this result, Belgium has punched its ticket into the knockout rounds while Russia is still alive and awaits the outcome of the South Korea Algeria match to see what they might need to do in their final match to escape the group stage.

MOTM: Eden Hazard (though it would be nice to see him play well for the entirety of a match just once at this World Cup.)