Jonas continues his culinary cheering journey with a lunchtime stop in South Korea. The cuisine was delightful, but the result favored Algeria.

When one has a rooting interest in a match sometimes the superstitious of us like to try to do little things in our lives to help nudge our squads to victory. So, finding myself in the position of having a clear favorite in each of the three matches on World Cup Match Day 11, I have undertaken the project of preparing three meals that would reflect the cuisine of my three favorite. Lunchtime was a stop in South Korea, to try to help cheer Bolton's Chung Yong Lee, to victory over Algeria.

For the second match of the day, I was firmly behind Chung Yong Lee’s South Korea squad. My lunchtime culinary support took the form of the traditional Korean noodle dish, Japchae. This chilled rice noodle dish contains a number of seasonal vegetables along with shitake mushrooms and is dressed with a soy and rice vinegar sauce. For bonus superstitious help, this meal was eaten in ceramic bowls that I purchased from a local artist when I was working in Yeoju, South Korea. 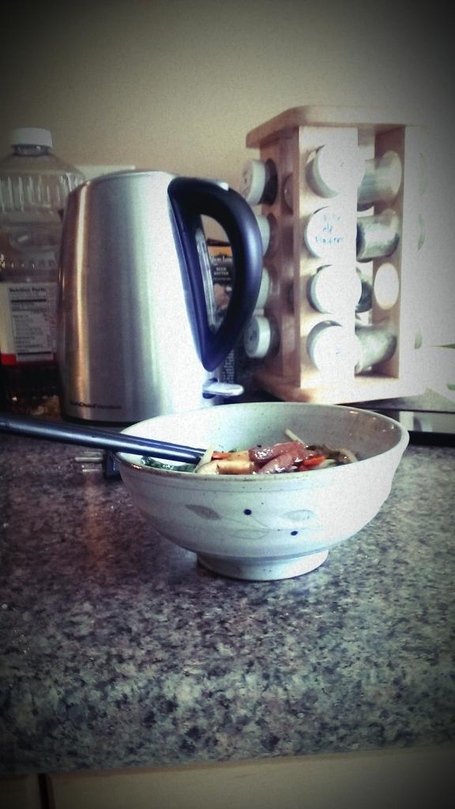 
Bolton Wanderers’ Chung Yong Lee started out nominally in the center of the midfield for the second match in a row, but early on was often popping up on the right where Bolton fans are more used to seeing the South Korean international.

The match began with Algeria very much on the front foot and taking the play to South Korea. During the first ten minutes the Foxes created three good chances.  The best of these was a free header from Slimani in the 9th minutes off a corner kick, but he directed his effort into the side netting. The match settled down for the next fifteen minutes with Korea winning back some of the possession, but not really doing much to threaten the Algerian goal.

The first breakthrough came for Algeria in the 26th. Medjani played a longball for Slimani and the Algerian striker outmuscled both Korean center backs before poking it past Jung for the first goal of the match. There was no respite for the Koreans as Algeria quickly doubled their lead, scoring off a corner in the 28th minute. Djabou put in a decent corner, and the Korean keeper Jung came for it, but completely misjudged it leaving a wide open net for Halliche to finish into.

The match settled down for ten minutes, and they started stringing some passes together going forward. However, a poor headed clearance from the Korean defense fell right to Slimani in the 38th minute. The Algerian striker played it over to the wide open Djabou who slotted it past Jung for the Foxes third goal for the first half.

The first half ended mercifully with no further Algerian goals for all Chungy and South Korean fans. The first stats backed up Algeria’s domination, with the Foxes winning possession 54% to 46% and Shots 12(3) to 0 (0). As might be expected with Korea seeing so little of the ball, there were few opportunities for CYL on the ball. Though, to be fair, the few occasions he was the winger looked lively, but less dangerous than during the Russia match.

South Korea came out attacking in the second half and it only took the Taeguk Warriors five minutes to get on the score board. Ki Sung Yeung played a hopeful long up towards Son Heung Min. The ball bounced fortunately off of Son’s back and fell to his feet. Son finished the chance off by slotting the ball between M’Bolhi’s legs.

South Korea kept control of the match, creating a number of dangerous opportunities, and it seemed like the match was poised to become a one goal match. However, in the 61st minute Algeria finally managed an attacking foray and a nice bit of build up play resulted in the fourth goal for the Foxes, this one scored by Brahimi.

In the 64th minute, shortly after the fourth Algeria goal, Chungy would be subbed off for Lee Kung Ho, Korea’s goal scorer in the Russia match. Lee looked quick and was good on the ball, but did not seem to have a huge impact on the match. Certainly a decent shift put in by the Bolton Winger; however, I would say his quality appeared much better during Korea’s first match against Russia.

The goal fest that is the 2014 World Cup continued as South Korea pulled another one back in the 72nd minute. The 6’6" giant, Kim Shin Wook knocked down a header in the box to Son, who had it clipped off his foot. The ball found its way to another second half substitute, Lee Keun Ho, who fed a ball across the face of goal. A determined run by Koo Ja Cheol got the Bundesliga based midfielder onto the end of Lee’s cross, and he just touched it into the net.

Perhaps the best moment of the match came in the 82nd minute when Slimani went down with cramp while South Korea had possession. Korean defender Hong Jeung Ho, with his team still in possession and in the attack, jogged over to the downed Algerian striker and started to help Slimani stretch out. The referee would eventually stop play play, but not before a good 30 seconds of impromptu physio-therapy work from Hong.

South Korea dominated the second half of this match, attacking the Algeria goal in waves. After a first half where the Korean attack didn’t must a single shot, they sent 8 efforts goalward (4 of which were on target). However, the defensive lapses of the first half proved to be too much for them to overcome. This leaves Algeria in a surprising 2nd in the group on 3 points heading into the final match. South Korea sit bottom of the group on 1 point, needing a win and some goal differential math needing to work out their way if they are to advance past the group stage. It looks likely that Bolton fans might only have a single match left to watch Chungy at this World Cup.

Cramp Counter: 1 (That I noticed, but it was classic)