When one has a rooting interest in a match sometimes the superstitious of us like to try to do little things in our lives to help nudge our squads to victory. So, finding myself in the position of having a clear favorite in each of the three matches on World Cup Match Day 11, I have undertaken the project of preparing three meals that would reflect the cuisine of my three favorite. With that, I bring you dinner from America. 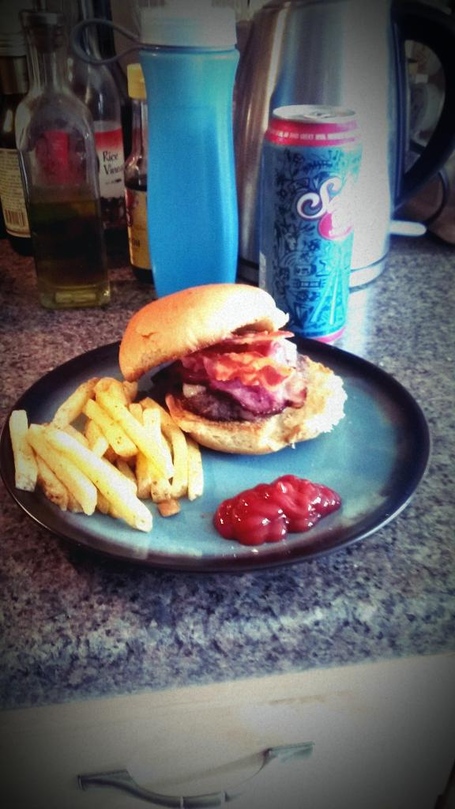 Ah, Murica, land of my birth and home of some the finest cuisine around. The burger, to me, is a distinctly American dish. However, to make this a truly Murican burger I added a thick slice of cottage bacon and multiple pieces of applewood smoked bacon to the fine grass-fed beef raised by the friendly local farmers at Sunshine Harvest Farms. In addition to the three types of meat, cheese was melted on top. Fries and a local microbrew completed this meal to try and help drive Murica to victory.

The United States entered this match knowing that a win would put them into the knock-out round, but a draw would still help the cause. On the other hand, Portugal knew a loss would eliminate them from advancing. The first five minutes bore this out, with Portugal pressing forward. This pressure allowed Portugal to grab the early lead. Geoff Cameron completely fluffed a clearance in the box, it fell to Nani who buried the simple finish past Tim Howard to put Portugal up one-nil early.

Portugal was forced to make an early injury sub when starting forward Hector Positga went down with a hamstring injury in the 16th minute. The Lazio man was replaced by Braga striker Eder.

After the goal the United States started to come into the game a bit, and had a fair bit of possession for much of the rest of the first half. The Yanks created nine shots (2 on target) in the 30 minutes after the Portuguese. However, none of them truly threatened Beto in the Selecção net.

The U.S.A. would stay in control until Portugal broke on the counter in the 41st minute. Nani drove another shot on goal that Tim Howard punched away. The Portuguese won a free kick in the scrum following the rebound, but Christiano Ronaldo put his effort well over goal.

Nani struck again from distance in the 45th minute and hit the post as Howard was caught leaning the wrong direction. Eder followed up the rebound and forced a heroic acrobatic save out of the American keeper to maintain the 1-0 score line.

The last couple minutes of the first-half passed without any other chances, and the States headed into the locker room lucky to be just a goal down.

The second half started a bit tentative for each side. The Americans had the first dangerous chance in the 55th minutes, when Graham Zusi played a through ball for right back Fabian Johnson. Johnson cut the ball back across the face of goal and midfielder Michael Bradley hit a shot toward goal that was cleared off the line at the final moment by Selecção defender Ricardo Costa.

The United States would finally breakthrough in the 63rd minute, when Jermaine Jones scored an absolute wonder-goal. The German-American midfielder picked up a loose ball off a U.S. corner, drove to the middle of the field, and struck a sublime curling effort around Beto, evening the scoreline.

Portugal almost retook the lead two minutes later when a loose ball fell to Raul Meireles. The midfielder hit a low hard drive that forced Tim Howard to make an excellent reaction save to push the ball wide of the net.

The game remained tied until the 80th minute, when substitute DeAndre Yedlin dribbled into the box, and played a ball across. The ball found its way to Michael Bradley, whose attempted shot was deflected to Zusi. A teasing ball back across the area found the American Captain Clint Dempsey crashing the net and directing the ball into the net from the United State’s second goal.

The final minutes of the match saw Portugal throw everything they had forward against the American defense as they fought to keep their World Cup hopes alive. The U.S. defense held firm until the last kick in the 95th minute. Ronaldo sent in an inch perfect cross to Varela who lost his marker, Geoff Cameron, and powered his header past Tim Howard to level the score at 2-2.

Going into the final round of matches, the United States are on 4 points and need a draw against Germany to guarantee they advance. Portugal, on a single point, has kept their slim hope alive, but with a -4 goal differential would need to make up a lot of ground to advance.