Jonas swears he went into writing his season preview feeling optimistic about the upcoming Wanderers' season. However, by the end of the process, he worries that Bolton fans are in for more of the same frustrating mediocrity.

The 2013-14 season for Bolton Wanderers was a potpourri of encouraging and depressing streaks that ultimately saw the Whites stop the rollercoaster on 59 points and in 14th place on the table (Note: It should be pointed out that this was not one of those exciting rollercoaster rides that leaves you invigorated, but rather one of those old all wood numbers that you’re not quite sure is up to safety code that leaves you worrying about an unscheduled house of cards like collapse.).

The squad finished with one more loss than win, as well as a -1 goal differential and to be honest that felt about right at the end of it all.

Fans all over Bolton are hoping that the Jekyll and Hyde act of previous seasons is behind the club and that going forward they can see consistent, generally positive results. However, an uninspiring offseason, as we stand at the end of July, leaves me feeling like the Wanderers are unlikely to give fans much reason for hope or to tune in (other than our irrational love for the club).

Thus far, I believe that the key signing of the offseason is that of Crystal Palace left back, Dean Moxey.

The 28 year old Englishman should bring some consistency to the position and hopefully greater durability than last season’s intended left back, Marc Tierney. Moxey’s statistical profile paints him as a reliable stay at home full back, rather than one likely to bomb forward. Last season, his 2.6 tackles and 1.5 interceptions per game would have ranked 3rd and 5th on the Bolton squad (for players who made more than 10 appearances).

The most important aspect of the Moxey move might not be Moxey’s ability in and of themselves, but rather that it will allow Tim Ream to slide over and consistently start in the center of the Bolton defense.

Ream brings a degree of skill with the ball at his feet and ability to help build possession out of the back (as opposed to hoofing it and hoping for the best).

A paring of Ream and either Matt Mills or David Wheater should turn out to be above average over the course of an entire season. So, in this way I think that the Moxey signing is the key one to this point.

An ideal signing for Bolton Wanderers would be a striker in one of two moulds. The first type would be a striker  win aerial duels, hold up the play up front, and be a competent enough passer to bring in Bolton’s actually talented attacking midfielders.

This would be a player in the mold of current Championship strikers like Rudy Gestede of Blackburn or Pavel Pogrebnyak of Reading.

A striker in this vein would be able to chip in 10 to 15 goals while also enabling the likes of Davies, Danns, Hall, and Lee to make runs off their hold up play and pepper the opposing goals with shots.

The second type of striker would be a quicker, more technical striker that would have the three attacking mids (in Dougie’s preferred 4-2-3-1) and the striker all making interchanging runs with each other and breaking down defenses with intelligent off-the-ball movement and incisive passing.

A player like recently promoted David Nugent from Leicester would be an ideal example of this type of striker.

For this type of striker if Bolton could find someone who could score around 15 goals, generate close to 10 assists, and perhaps more importantly be able to play 1.5 to 2.0 key passes per game, I think that would be as close to ideal and realistic as the Whites could hope to get.

Starting XI for the Opening Match vs. Watford 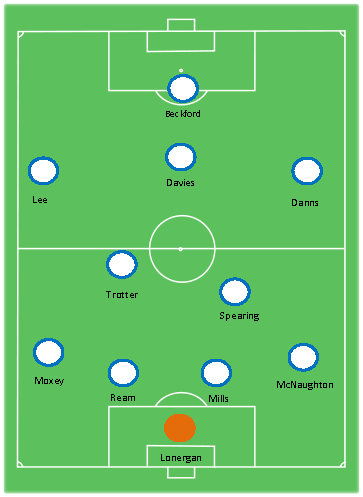 I think Dougie lasts the season, if for no other reason that I feel like the number one directive that was given to Freedman was to trim the wage bill and reduce the size of Bolton’s squad.

With the exception of a couple of high earning hold-overs from the premier league days like Davies and Lee, I think that in the eyes of the board, Freedman has done the job.

The only way that I see the manager being fired in the middle of the season is if the fans go into full on revolt mode and Gartside feels he needs to something to shake up the club (because we all know Ed Davies isn’t going to fire is buddy Gartside, even though that would be the preferred change).

I feel that with the moves that have been made this offseason that Bolton are maybe 3 points better than they were last season.

In my head, 2 of these points are coming from Ream being a full time center back, and his skill helping Bolton see out a game and not concede a late equalizer.

The other point is coming from a full year of Neil Danns, who will earn Bolton a draw in a game that they had no business getting a result from.

This would have Bolton finishing on 62 points. Over the last 5 seasons, the average final table position of a team with 62 points has been 12th.

If Bolton were to sign a forward of sufficient ability, as described in the Ideal Signing section, then I think they could easily improve a further 6 points, on top of the 3 points that I think they might have already improved, and would finish on 68 points.

Over the last 5 seasons, the average final table position of a team with 62 points has been 8th.