Sigh - I hate writing these when we play so badly

That was hugely, hugely shit.

First I'd like to thank Luke for the free ticket, but Christ almighty that was hard going. Credit to Bury though, they were excellent.

Good seats though. Would have thought Bury's assembled masses would have made more noise, but then again they were probably just a bit overawed at their surroundings - must have been a nice change for them to sit in a two-tiered stand.

Fair play to them, the entire town turned up: 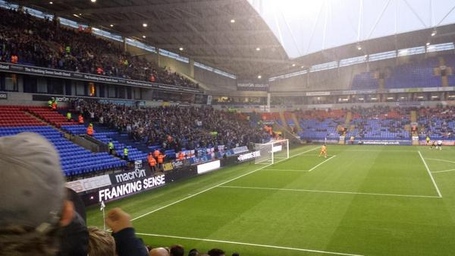 It's fair to say that for 95 minutes we were outclassed, outfought, outplayed and outthought by Bury and David Flitcroft. Hugely embarrassing and hugely problematic ahead of two tough home games against Middlesbrough and Nottingham Forest on Saturday and Tuesday respectively.

So what have we learned?

I don't like modern footballers. They're too interested in their shiny orange boots with their nicknames or Instagram handles stitched into the fabric. They drive ostentatious cars and like taking selfies in their weird bail hostel style apartments.

Bolton Wanderers manager Dougie Freedman has often talked up Rob Hall's potential, but does anyone else truly see it? The lad is a shithouse.

Take last night - it was clear after five minutes that the lad was scared of the Bury right-back who, admittedly, was a complete unit, but still - Hall went into hiding, actively avoiding the ball and refusing to take his man on.

Whenever he had five yards of space he threw in piss-poor crosses that failed to beat the first man. It was a miracle that he made it out for the first half but I hope and pray it's the last time that we see him in a Bolton shirt for some considerable time.

Put the mobile phone down, stop posting these stupid pictures and get down the gym and lift some weights. Eat steak three times a day washed down with a pint of Guinness and man up. Either that or we should loan him out to get more games under his belt.

The summer tribunal set his transfer from West Ham with the following payment conditions:

Granted, we ain't going to be paying that £250k any time soon, or the £10k appearance money, and you can discount the profit clause too. He's made 22 appearances (according to Wikipedia) for the club, so on top of the £450k initial fee he's cost us another £55k on top. Value for money at half a million? Not sure.

It's still early days, but he looks out of his depth to me..

2) Dougie's Stubbornness Will Be the Death of Bolton Wanderers

We've been patronised by managers before. Sam Allardyce and Gary Megson often told us that we were impatient, or that we didn't have a clue what we, as fans, were on about. This is probably true (definitely),

However, when we're told that the manager 'the fans know what we're trying to do' in one of his most recent patronising interviews in the BEN there comes a time when we have to stand up and say something.

The manager's stubbornness is going to be the death of us all.

He insists on persevering with the likes of Jermaine Beckford, Darren Pratley, Liam Trotter and Tim Ream. All of these players (and more) show time after time that they are not good enough - yet the manager insists on keeping them in the side week after week?

Why? It's certainly not their stellar performances.

He then comes out with a baffling post-match interview in which apparently we won, not by luck, but by 'playing the right way'. Bizarre. Apparently 'right way' is by having your team avoiding the ball for 94 minutes then shoving David Wheater up front to join Beckford and Craig Davies. Seriously. We did this against a Fourth Division side.

It is in, in my opinion, because he is one of those managers who is convinced that he is right. It's the reason why he bombed out Kevin Davies and Chris Eagles, and it's the reason why he refuses to see the evidence of his own eyes when presented with performances like those given against Bury.

I like to jerk my knee with the best of them, but by Christ if Pratley, Hall, Beckford and Trotter ever play for Bolton Wanderers again after that shambles then they can count themselves incredibly lucky.

Freedman's stubbornness extends to the in-action decisions too. During the game, we all saw the pathetically ineffective Rob Hall struggle against the Bury right-back but at no time did Freedman offer to switch him with Liam Feeney to shake things up. It might not have worked, but how do you know unless you try?

When it came time for substitutions he simply exchanged like for like, with little or no regard for tactical switches. Frustrating is not the word.

I hate being negative about Bolton Wanderers but that was genuinely amongst the poorest 90 minutes I've ever seen from us and the manager has to carry the can.

He got rid of Chris Eagles because apparently he fell out with the former Manchester United and Burnley maverick. Granted, Eagles could never be described as a grafter, but he has more talent and ability in his fingernails than the rest of the attackers in the entire squad.

Such a shame that he chose to dispense with the player when we could really do with his experience and ability in the side. With the absence of Mark Davies a regular concern, it's a problem that he has yet to address the lack of creativity in the first team squad.

3) Wanderers Have Real Problems in Midfield

Medo and Jay Spearing are a hopeless pairing.

They are unable to bring the ball forward, and seem unwilling to 'show' for the ball when their centre halves are in possession leading to the now famous Matt Mills diagonal hoof - a trait shown last night by Dorian Dervite and David Wheater on many occasions. Yet they are automatic first-pick central midfielders

Last night against Bury the centre of the park was afforded to Liam Trotter and Darren Pratley.

If that's the back-up we've got to a pair of underperforming midfielders such as Medo and Spearing then heaven help us all.

Why didn't Josh Vela start? Dougie loves to go on at length about how Vela is now 'ready' - but barring news of an injury why didn't he play last night? He can tackle, pass and carry the ball - something that Pratley and Trotter seem unwilling to do.

It was obvious that the side was crying out for some attacking thrust but it was only in the 78th minute that he brought on Neil Danns. Now let's not beat around the bush - Danns is incredibly average.

I think the best description of the lad is that he's a trier - but he's not especially talented in any respect. It's an indication of how poor our midfield is that he stands out as one of the more incisive and energetic performers.

So that means that Medo, Spearing, Pratley, Trotter et al have all shown and failed to dominate the midfield. We need the lads to step it up because as Dougie often says, we haven't got the funds to bring in new blood.

Ahead of Forest at weekend I think it's the most important decision that the manager has to make - who does he pair in midfield? I suspect he'll go back to Medo and Spearing as a tried and somewhat trusted pair because Dougie is oh-so clever.

And it won't work.

The less said about the wingers the better.

Shouldn't have got rid of Chris Eagles.

Has there ever been a more infuriating player?

I don't mean that bloody stupid 'thumbs up' gesture that he loves so much.

Vaunted as an out-and-out goalscorer with a killer instinct, he was supposed be a sort of Klasnic-lite in that he could never be expected to run into the channels or to play as a target man. He's nothing of the sort.

When not being a bone idle sod, he's a whinging, uninterested and crushingly poor example of a modern centre forward.

He could easily have scored at least two goals last night but each time his finishing let him down. First, when fed with a delightful inside pass from Liam Trotter he scuffed his finish allowing the Bury keeper to make a regulation save.

The worst was yet to come.

In the second half, with Wanderers trailing 0-1, Beckford was presented with a wonderful chance following some good work from his strike partner Craig Davies.

Instead of slotting the left-footed opportunity into the Bury goal, he instead thrashed wildly at the ball and instead belted it into the North Lower. Unbelievable.

Wanderers obviously have striking problems, but the continuing selection of Beckford is still a head-scratcher. I know he was our top scorer last season, but that's like winning a tallest dwarf competition.

Frustrating is not the word.

You've got to hope that new signing Joe Mason will be brought in at the weekend to play off Craig Davies but I can feel in my bones that clever clogs Dougie will decide differently. 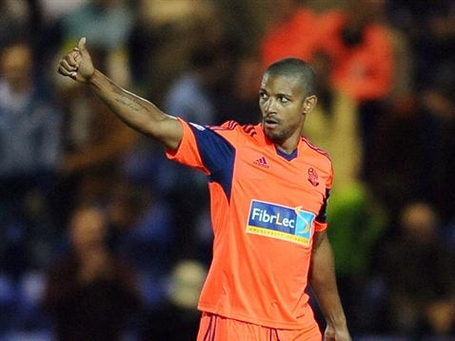 5) A Bad Night for the Kids

I am a fan of giving youth a chance, but last night against Bury was a bad night for our kids.

Conor Wilkinson and Oscar Threlkeld both had chances to show their worth, but unfortunately both had nights to remember.

Wilkinson, who impressed so much over pre-season, wasn't given a sniff as he was nullified by strong and experienced defenders in the Bury ranks.

His contribution was hampered by a lack of creativity in the side, and he was forced to feed on scraps at best.

He struggled, and though I do not blame him for the performance, neither was I blown away as I had hoped to be.

More time on the bench with the odd 15 minutes here and there beckons for the lad. I don't think he's ready yet.

Threlkeld offered a solid and steady presence at the tail end of last season. However, his own performance last night offers a vision of the future, and it's Kevin McNaughton.

He struggled with an attacking Bury side who took to the left wing time after time.

The main criticism of Gretar Steinsson throughout his Bolton Wanderers career was that he had the worst positioning in the history of football - but Threlkeld gave a good impression last night that he is cut from similar cloth.

He often left Liam Feeney facing two men, instead being dragged inside next to his centre-halves, meaning that the Bury #11 had a simple overlap to put in a dangerous cross.

Again, I'm not writing the lad off for life, but he's another one who is clearly a squad player - and rightly so at this moment in time.