In a brief update to proceedings, I've had the following league table sent to me by the good people at Sports Interactive, the brains behind the Football Manager game series: 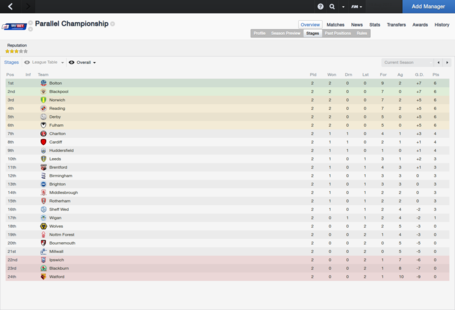 As readers may know, I am playing through the Championship season as Bolton Wanderers attempting to improve results achieved by Dougie Freedman and his bunch of slackers:

The Middlesbrough game should be played later tonight.

It would have been contested earlier but I forgot to forward on the email with the details of my opponent from my work email to my home, and so I missed one appointment to get the match sorted.

I fully expect to win given previous results and the fact that we've got this league sewn up and it's not even the fourth week yet.