After a quite magnificent start to the season which sees Bolton Wanderers leading the way in The Championship, manager Chris Manning took his Bolton Wanderers side to the Southernmost point in the world, Brighton and Hove Albion Football Club.

There had been calls from some within the Bolton camp into the sportsmanship of their opponents with their intention to field both Brighton and Hove, but this was cleared up before hand and the game was allowed to go ahead

Despite taking the longest journey in the history of sport and facing two teams, Bolton continued their dominance in this division by thumping their opponents 4-0.

To the delight of Wanderers fans, the scoring was opened by loanee Kevin McNaughton who netted a rare goal after 26 minutes.

This was soon followed up by the clinical Jermaine Beckford and moments later Jay Spearing who ensured Bolton went into the Manning half time team talk with a comfortable three goal lead.

Bolton were constantly creating chances throughout the game and were 4 up soon after the break with the prolific Chung-Yong Lee netting again for Manning's virtual Lancastrian side.

Lee has been a revelation this season and quite rightly has taken home the Man of the Match Award. 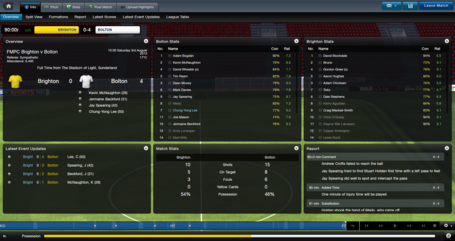 One fan had this to say about Chung-Yong's performance:

The jubilant Bolton manager and Nobel Prize winner for Contributions to Science had this to say:

It's not my ideal team, but you've got to take the positives for this one.

Usually we're guilty of not taking our chances, but it's a percentages game.

Beckford will get his chance he scored loads of goals for Wealdstone in the Dog & Duck League.

The fans have to patient #bingo'

We have requested that Mr Manning does not ‘hashtag' verbally but he told us:

Bolton continue their virtual campaign with a game against Leeds United.