If you don't want the next 10 months of football to be ruined avert your eyes quickly.

As Bolton's third successive year in the second tier of English football approaches we felt that it's time to try to predict the impossible. With less than 2 weeks to go until the season kicks off at Vicarage Road I have to try and rationalise between my head, and my heart. Long-gone are the days of European adventures and top-half premier league finishes. The reality is that the club has a mediocre squad and limited funds to improve it, so with that in mind here goes nothing.

There really hasn't been many to chose from. I think that Freedman has done well in convincing Dean Moxey to come to the Macron Stadium, his experience and class should hopefully stabilise our shaky defence, which conceded 60 times last campaign. At 28, Moxey is in the peak of his ability yet still has bags of championship experience after playing at the iPro Stadium and at Selhurst Park.

Kevin McNaughton's arrival on loan should turn out well again. It was with McNaughton's help that the Wanderers started their season, after he came in and solidified the defence which kept a clean sheet for the first time last season at Bloomfield Road.

Another key signing in my mind could be young Rob Hall. Despite signing last season, we saw Freedman limit hall to only 22 appearances in the league as he struggled to dislodge Neil Danns as a starting winger.

This could be the season that the 20 year old blossoms and fulfills his potential. We saw glimpses of Hall's flair last season, if he can mature on and off the field he has the potential to be an integral member of Freedman's side.

This one's quite tricky. We can exclude improving on our midfield, as it's already overly congested as it is. The defence doesn't look too bad so far as long as it stays fairly injury free. The ideal signing would definitely be a striker, as Jermaine Beckford has yet to show me any signs that he can be bothered to make a creative run or to at least put pressure on the opposition's centre backs.

The club's funds are in the red so if anyone's coming in, they will preferably have to be unattached. Federico Machedo could have been an exciting gamble however Cardiff City snapped him up after his release from Old Trafford. We do need a competent striker to come in, however we may be limited to loaning in a youngster.

If so, Liverpool's Jordan Ibe would be a very smart acquisition in my mind. Ibe featured at the Reebok Stadium in the final game of last season whilst he was on loan with Birmingham City. Ibe demonstrated that he has both flair and speed as he terrorised our back 4 in the latter stages of the game.

Starting XI for the opening game against Watford : 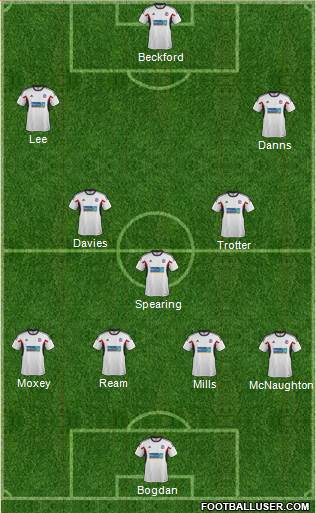 Yes. I have to admit I've struggled to like the Scotsman with his stubbornness and generic press-conferences in which he's a regular player of cliché bingo. We questioned Freedman's future various times last year, however his position seems to be stable and the fans are now slowly starting to seeing his 'plan' come into fruition. After slashing his elderly high-earners Freedman has put a greater emphasis on our youth, which pleases me. As long as we can make a better start and start to become more consistent he should be safe.

We have a decent squad but it's nothing special.

From an outside observer's perspective we've had a good pre-season. If the club's YouTube evidence is anything to go with we seem fit and well motivated, however many state that the championship is almost impossible to get out, and they seem to be true.

Out of the 3 relegated teams from the premier league I can see Cardiff City dominating, as they've made some brilliant summer signings with Adam Le Fondre and Macheda. Norwich and Fulham may struggle to adapt with 2 managers lacking in championship experience. Even if we get a good striker the club is undergoing a transitional stage as we've seen the old-guard shown out the door, and some younger, eager faces coming in.

We're not good enough to sneak into the play-offs or even mount a feasible automatic push, as fans we shouldn't be too expectant on an immediate return to the top-flight.

To do well in this division you don't necessarily have to have the most money or the most prestigious squad, you have to be well trained. defensively solid and consistent. Unfortunately, right now that isn't Bolton Wanderers.

To a certain extend, yes.

I believe that now is the right time to sell Lee-Chung Yong before we see him leave on a free or sign a pre-contract elsewhere in January. Ever since he sustained the double leg-break against Newport County he hasn't been the same player. If the reported £3 is offered then in my opinion it's a no-brainer.

I'd even let Mark Davies go as he hasn't performed over the past 2 seasons.

However Adam Bogdan should be offered a new-contact and should be kept around at all costs. He's our longest serving player behind Lee-Chung Yong and deserves to be at the club.